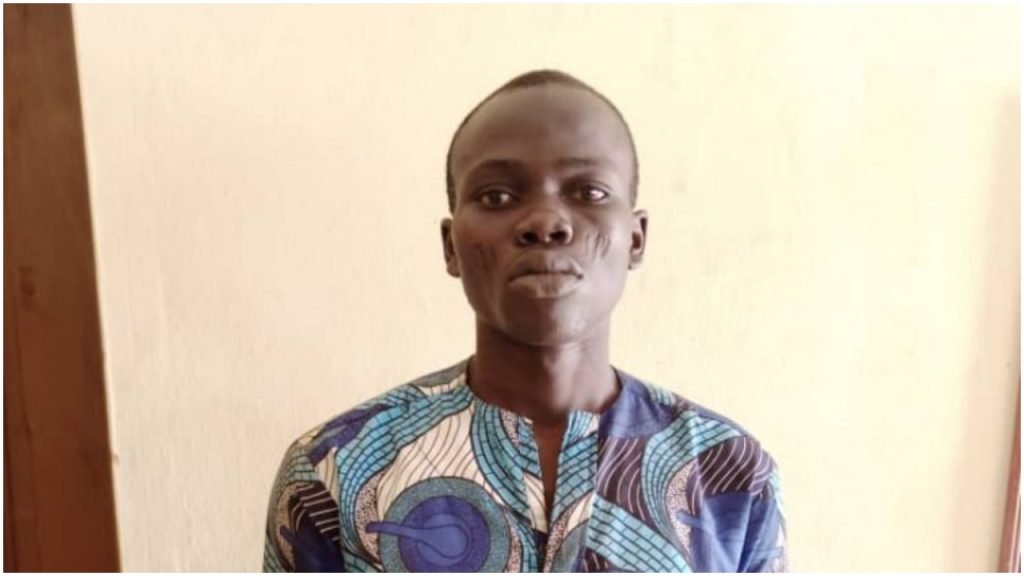 Dansu Asogba, a 23-year-old indigene of Ogun State has been arrested by the police for allegedly killing his 60-year-old aunt, Iyabo Dansu over alleged witchcraft.

In a statement on Saturday, the Ogun State Police Spokesperson, DSP Abimbola Oyeyemi, said the suspect was arrested following a report by two children of the victim at the Ipokia Divisional Police Headquarters.

According to Oyeyemi, the children had reported that they were informed on August 22 that their mother, who was not suffering from any illness had died.

Oyeyemi hinted that the children of the deceased “stated further that since they were not suspecting any foul play, they decided to bury her without necessarily reporting to the police.

“But immediately after the burial, they heard information that the suspect, who is a nephew to the deceased was seen in her house on that fateful day, and shortly after he left, the woman was declared dead.”

This, he said, aroused the suspicion of residents as they threatened to carry out a traditional ritual to expose the killer.

Hearing the determination of the community to go spiritual about the death of the woman, Asogba reportedly came out to confess being the one responsible for her death.

The DPO Ipokia Division, SP Adebayo Hakeem, was said to have detailed his men to the scene where the suspect was arrested.

“On interrogation, he admitted killing the deceased, but claimed that he did so because of his belief that the deceased was responsible for the death of his first child and the subsequent miscarriage suffered by his wife.

“He confessed further that it was an iron rod he used to hit the woman on the neck which resulted to her death,” Oyeyemi said.

Meanwhile, the Ogun Commissioner of Police, Edward Ajogun, has ordered that the case be transferred transfer to the homicide section of the State CIID for further investigation.

“DNA Test Is Not For Nsukka Men, We Are Covered By God’s Grace” – Man Says

digestng - January 25, 2021 0
File Photo A Nigerian man has stated that DNA test is not for men from Nsukaa in Enugu state because they are covered by...

digestng - January 25, 2021 0
Taking to his Twitter page, he wrote about the death of his mother, as he revealed the healthcare workers failed to tell them...

Bobrisky Shows Off the N15 million Cash His Lover Gave Him...

Asthmatic Patients Were Forced To Accept To Be COVID-19 Positive