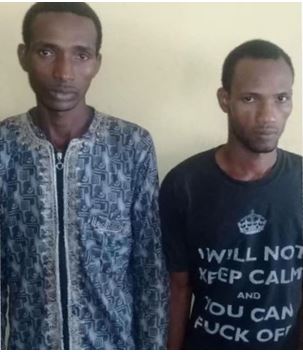 The Ogun State Police Command have arrested two out of three herdsmen, who went into hiding after attacking a family in a farm settlement in Ogun State.

The herdsmen stole a cash sum of N140,000 from the family then raped a 16-year-old member of the family on Wednesday, September 9, 2020, at Afowowa Gbelu Village in Ewekoro Local Goverment Council Area of the state.

According to the State’s Police Spokesperson, DSP Abimbola Oyeyemi, the suspects, Abu Adamu and Muhammadu Aliyu, alongside a third person who is now at large, invaded the farm settlement, attacked the house of one Aminat Okeshola, dispossessed the family of a cash sum of one hundred and forty thousand naira after which, they took a 16-year-old daughter of the family to a cassava plantation, where they took turns on her.

Oyeyemi said that following a distress call, policemen swiftly swung into action and combed the entire area and succeeded in arresting two of the suspects, who took to hiding in a nearby bush on sighting the detectives, while the third suspect escaped. The two arrested suspects were immediately identified by the victims.

The state Commissioner of Police, Edward Awolowo Ajogun, has ordered a manhunt for the fleeing member of the gang.

Kano Woman Who Hacked Her Two Children To Death Pleads “Not...