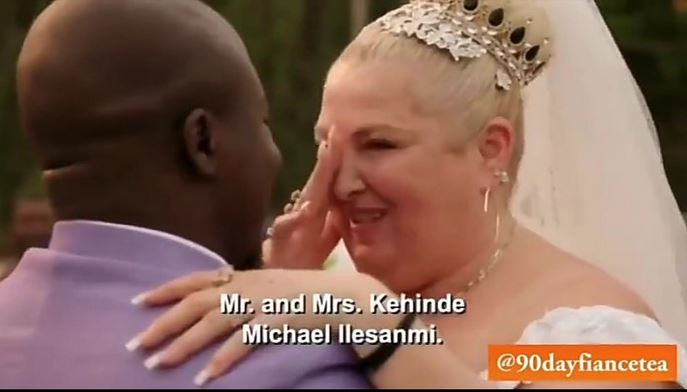 90 Days Fiancé couple, Michael Ilesanmi and Angela Deem recently had their wedding in Lagos, Nigeria and there was a mild drama at the wedding reception.

Everyone takes their places, and Angela walks down the aisle toward her future. Michael is wearing a purple suit and waits for his bride on the other side of the aisle. They come together, and Michael unveils his soon-to-be wife. Michael says his vows first, and Angela gets a little teary during his part.

Angela was emotional when Michael said his vows to her at the Minister’s prompt. However, when it was her turn, she wasn’t comfortable with making certain promises.

When it’s Angela’s turn, she starts to repeat the words to the vows. However, when the person performing the ceremony says, “to obey,” Angela reacts.

“What?” she asks. It’s repeated to her again, and she seems unsure of how to reply. “Obey what?” Angela asks. “And obey who?” Then Angela laughs, and says the words, albeit almost inaudibly. They get married.

Her act caused a mild tension at the wedding as guests were surprised at her utterance and waiting for the next line of action.

Woman Stabbed 23 Times By Her Ex-boyfriend After He Saw Her...

Group Demands Nigerians And Zimbabweans Out Of South Africa