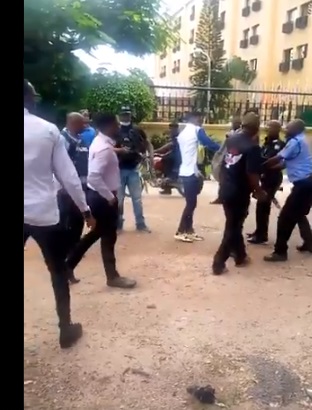 A group of police officers have been caught on tape assaulting some young Nigerians who took to the streets of Abuja to protest against the increased electricity tarriff.

@AyowoleSanyaolu who noted that the protest at the Nigerian Electricity Regulatory Commission (NERC) office in Abuja was peaceful, said the policemen who assaulted them told them that they don’t have the right to protest.

“While we protest peacefully at @NERCNG , Abuja, against the thoughtless increment in electricity tariff, @PoliceNG descended on us fiercely. A number of us were mercilessly beaten and others were dragged like common criminals. But in all, we stood our ground. Tyranny will not win!

@PoliceNG says Nigerians have no right to protest”