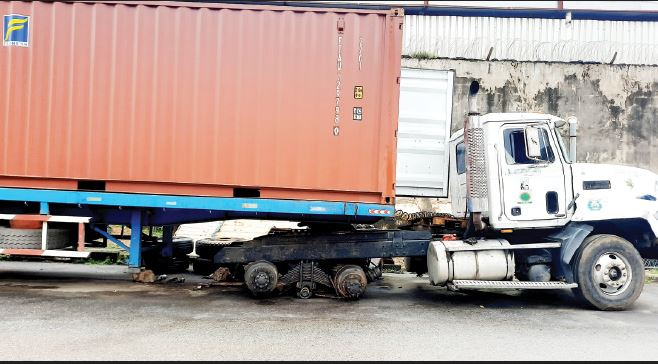 According to PUNCH Metro, a yet-to-be-identified apprentice auto mechanic lost his life on Monday, a few weeks to securing his freedom, while working under a containerised truck beside the Chivita Teashop at the Ajao Estate area of Lagos State.

It was learnt that the deceased was working under a loaded twin 20-foot containerised truck around 8pm when the jack that raised the truck up slipped and the chassis frame crushed him to death.

During a visit to the scene incident on Tuesday, it was observed the bloodied scene under the truck, while the whole area was deserted.

An eyewitness, Bashiru Simeon, told our correspondent that the deceased had been working on the truck for the past five days before his death.

He added that he learnt that the deceased was supposed to earn his freedom from his boss next month.

Simeon stated, “The boy came from Ibadan to work on the truck and while he was working on it with one other person yesterday (Monday), they used a small jack to raise the chassis of the truck up.

“As the other person was hitting the truck, the jack slipped and the chassis frame fell on the apprentice’s head and he died on the spot. The rescue team had to use a forklift to lift the truck before they could remove his corpse.

“It was five days they had been working on the truck before the young man died yesterday (Monday) and I heard that he was about to secure his freedom next month.”

Confirming the incident, the Head, Public Affairs, LASEMA, Nosa Okunbor, said, “On arrival, the body of a male adult mechanic was found on the floor in a pool of his own blood.

“Further investigation revealed that the mechanic was working under a jacked up twin 20-foot loaded containerised truck and the jack suddenly slipped and the chassis frame member by the turntable hit him and he fell and died almost immediately.”

Okunbor added that the corpse was handed over to policemen from the Ajao Estate Police Division.

“Make Sure You Are Making Money From Trolling People”

Horror! 17-Old Boy Gets Electrocuted After Falling Onto Train Tracks During...