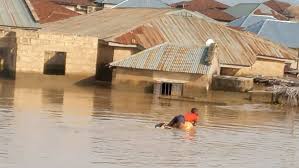 As many as eight people are feared dead after their vehicle plunged into a river in Kware local government area of Sokoto state.

According to Daily Trust, it was gathered that the incident occurred around 12noon on Thursday but neither their bodies nor the vehicle was recovered as at the time of filing this report around 3 pm on Friday.

It was said that seven passengers were on board the vehicle which was said to be heading to Illela local government areas before the incident.

Another account said that the vehicle hit a motorcyclist who is believed to be among the missing victims.

The Director, Relief, and Rehabilitation of the State Emergency Management Agency (SEMA), Mustapha Umar who confirmed the incident said search was still on to recover their bodies and the vehicle.


“We don’t know the exact number of people involved and the type of the vehicle, because we couldn’t get somebody who was there when the incident happened.

” But the local divers hired were able to locate the position of the vehicle in the river and they said it was a small vehicle that could contain seven people, including the driver.

“As I am talking to you, search is still on to recover their bodies, and a crane is sent to bring out the vehicle from the river,” he said

The spokesman of the National Emergency Management Agency, Aliyu Muhammad also confirmed the incident, saying their men were still on ground for search and rescue mission.


“Until we establish the number of people on board, we cannot tell you the number of dead, because we confirmed from the motor park in the area that none of their vehicles was involved in any accident on that day, meaning the vehicle did not take off from the garage,” he said

Hillarious!! Nigerian Evangelist Warns Against Fake Names Lovers Will Use To...

“I’m So Sorry” – Ellen DeGeneres Apologises Publicly Over Allegations of...