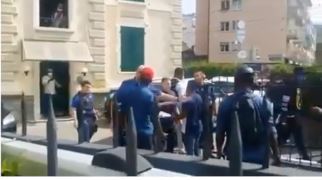 A video has surfaced online showing the moment Swiss Police showed up at the Nigerian embassy in Switzerland to throw out Nigerian citizens after allegedly being called in by the embassy authorities.

Some of the Nigerians who were heard shouting on top of their voices, alleged that they had already made payments for their passports to be renewed but the embassy failed to fulfil the service they paid for.

They also accused of the embassy authorities of failing to learn from the country they are in.

See How Nigerians Are Reacting On Social Media After FG Increased...

“I Asked My Husband Out’- Activist Aisha Yesufu Reveals