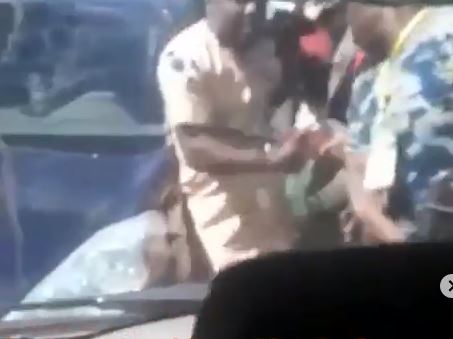 A video has surfaced showing the moment some officials of the Independent and National Electoral Commission (INEC) travelling back to Abuja following the conclusion of the Edo governorship election, were on Monday September 21, were allegedly assaulted by some police officers.

The incident occurred along Auchi Road in Edo State and involved a police van with number plate ‘NPF2529D’. It was gathered that one of the INEC drivers had confronted the Police officers for hitting the car he was driving. When other INEC officials came down to introduce themselves, they were assaulted.

One of the INEC officials who was filming the incident, was allegedly struck on the head and ribs with a gun. The electoral officers are said to be stuck in Edo State as some of them have been hospitalized.

The case has been reported to the police public complaint unit and an investigation has been launched.

Here are the videos below;

Governors, Top Personalities Tried To Bring P-Square Back But Failed