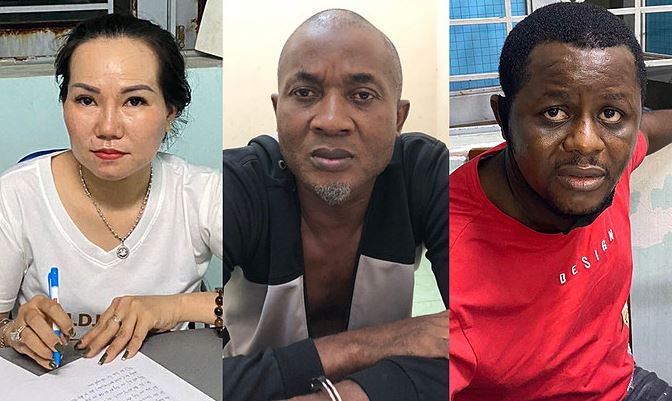 
On Thursday, September 24, two Nigerians and one Vietnamese woman were arrested for trafficking methamphetamine in Ho Chi Minh City, Vietnam.

Ochie Paul Ejike, 51, and his 35-year-old Vietnamese wife, Ly Moc Kiu, along with Chukwuemeka Confidence Onyiriuka were identified as major figures in a drug trafficking ring monitored for several months.

Vietnam has some of the world’s toughest drug laws. Those convicted of possessing or smuggling more than 600 g of heroin or over 2.5 kg of methamphetamine face death.

Chukwuemeka was discovered to often received shipments of clothing from Cambodia at an apartment in Binh Tan District, without any clothes ever seen being sold.

Every week, he met Ochie and Ly at various secret locations. Ly was later found with 3kg of meth hidden in tea packages inside her storage compartment.

She confessed to the police that she used to sell clothes but her husband made her switch to trading drugs. Each week, she received 5 to 7kg of meth, which she delivered to her partners.

She earned VND70 million (about 1 million Naira) per kg. Ho Chi Minh City has been a transit hub for drugs trafficked to Taiwan, the Philippines, Malaysia, South Korea and even Europe, Australia and Latin America.

Panic As Kidnappers Abducts Two Brothers As They Arrive To Pay...

Two Arrested In Rivers With Substandard Ponmo From Madagascar

Nigerians Reject Moves to Restrict Use of Social Media