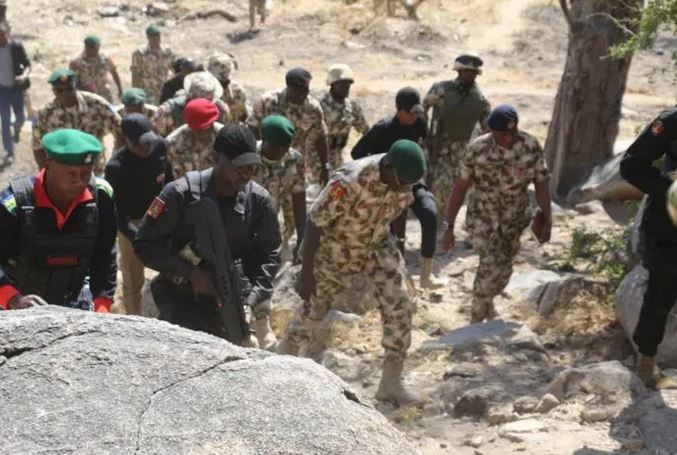 Chief of Army Staff, Lt.-Gen. Tukur Buratai and other officers in Borno State

The Nigerian Army on Saturday buried three soldiers reportedly killed in a recent ambush by suspected members of Boko Haram.

The unnamed soldiers were buried at the military cemetery located in the Maimalari Barracks of the 7 Division, Nigerian Army in Maiduguri.

The Chief of Army Staff, Tukur Buratai, was reportedly at the funeral that quietly took place on Saturday morning.

Journalists were not invited to cover the funeral.

The three soldiers were buried four days after a Brigade Commander, Dahiru Bako, who died after an ambush along Biu-Damboa road, was laid to rest at the same cemetery.

It is not clear if the three deaths were related to the ambush on the late Bako. The army has not spoken on what happened to the soldiers with the slain colonel when his vehicle was attacked.

Mr Isa, a colonel in the Nigeria Army, could not be reached at the time of filing this report.

A WhatsApp message sent to him at about 10:56 a.m, seeking information about the said funeral was not replied.

The burial took place barely 24 hours after Boko Haram attacked a convoy of some Borno government officials along Monguno-Baga road.

Three soldiers, eight policemen and four operatives of the Civilian-JTF were killed during the Friday attack.

The corpses are yet to be buried at the time of filing this report.

Father-of-five Flees After His Wife Delivered Quadruples, Bringing His Children To...

Oldest Prostitute In Kenya Retires After Servicing 28,000 Men For 22...