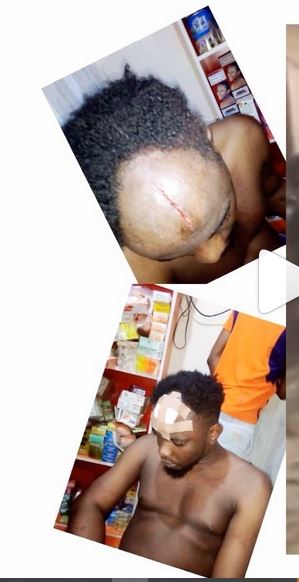 A 27-year-old man identified as  Kelvin Ilome was seriously brutalized by a team of police officers led by Corporal Godspower who allegedly broke into citizens’ homes with no search warrant in Abraka, Delta State.

According to Advocate Harrison Gwamnishu, the bribe-seeking police officers were on unofficial duty breaking into people’s home to harass them.

“Kelvin wasn’t spared. He had demanded for a search warrant from these officers but was assaulted instead.These officers later took him to Divisional Police Headquarters Abraka where Corporal Godspower hit the victim on his head with a baton which in turn caused severe injuries on the head.

The officer is currently detained as ordered by the DPO CSP Aliyu Shaba. We want police brutality to end in Nigeria and we hope this officer is used as a scape goat to serve as a deterrent to others “ He said.

Shocking! How A Married Man Bathed His Own Wife And Son...

COVID-19 Palliatives From Nigeria Is Reportedly Being Sold In London

Oduduwa Will Be Sad to See Nigeria Split