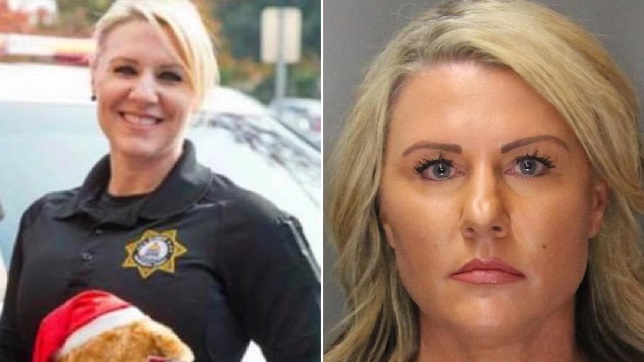 Shauna Bishop has been jailed by a court for the act

A former sheriff’s deputy has been handed six months jail term after she watched a sex movie before sneaking into the house of an ex-lover to rape his 16 year-old son.

According to Metro UK, Shauna Bishop, 46, was imprisoned in Sacramento, California, last Wednesday over the April 2019 incident, which saw her creep into the child’s room and attack him.

Bishop did not rape the boy while on duty, and did not meet him through her job.

She targeted him after befriending his mother, and attacked the child after coming over to his home to discuss his underage drinking and weed use. Bishop is said to have spent the night, and crept into the boy’s room, where she performed abusive sex acts on him, before urging him not to tell anyone.

The sex attack came to light after her ex-boyfriend – the victim’s father – told his former wife that he was worried Bishop was ‘grooming’ their son, and reported her to police in June 2019.

During an interview with Folsom Police, Bishop claimed not to be able to remember what she had done, because she had taken sedative Ambien at the time. She told investigators she had assaulted the boy after watching a pornographic film.

He was two years below the age of consent in California at the time. Bishop has been fired from her job as a deputy sheriff with Sacramento County Sheriff’s Office, where she had worked for five years prior to her dismissal. She must also complete work-release probation when she is freed, and register as a sex offender on being released from prison

Fani-Kayode Takes COVID-19 Vaccine Months After Describing It As Evil And...

Tim Godfrey Reveals How He Was Able To Feature General Overseer...