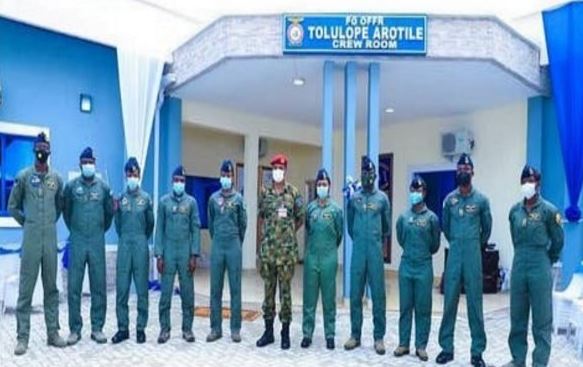 The Nigerian Air Force has named a two-block of 4 x 2 Bedroom Married Officers Accommodation at the NAF Base in Abuja after the late first female fighter pilot, Flying Officer Tolulope Arotile.

A remodeled Pilots’ Crew ‘Room’ at the 115 Special Operations Group (115 SOG) Port Harcourt was earlier named after the late female pilot who died in a car accident at the NAF Base in Kaduna.

Eight other deceased officers, who died in active service, were also honoured with blocks of building named after them.

This was announced during the commissioning of newly constructed Blocks of Married Officers Accommodation and Transit Accommodation for Officers and Airmen at NAF Base Asokoro, Abuja.

Director of Administration, Air Vice Marshal A.G. Pani, said that the buildings were constructed by the Ministry of Defence as part of its 2018 capital project.

According to him: “In line with the NAF’s tradition, all the blocks being commissioned today will be named in honour of some of our personnel who lost their lives in service to our fatherland.

“Additionally, the two Blocks of 4 x 2 Bedroom Married Offrs accn are named after Flying Officer Tolulope Arotile (NAF/4512F) who died as a result of Road Traffic Accident on 24 Jul 20 at NAF Base Kaduna and Flt Lt John Ayonoteh Adams (NAF/3104) who was KIA on 19 Feb 13 while participating in OPERATION ZAMAN LAFIYA”.

Chief of Air Staff, Air Marshal Sadique Abubakar, noted: “The provision of befitting accommodation for our personnel and their families remains a top priority for the NAF.

“Hence, on assumption of office we deliberately embarked on relentless construction of new office and residential accommodation in various units across the country.

“We are currently undertaking massive renovations, remodelling and upgrading of existing accommodation in NAF Bases across the country in order to bring them to acceptable standard.

“We are indeed very grateful to the Honourable Minister of defence for sharing this laudable passion with us”.

Jubilation As Power Is Restored In Maiduguri Two months After Boko...