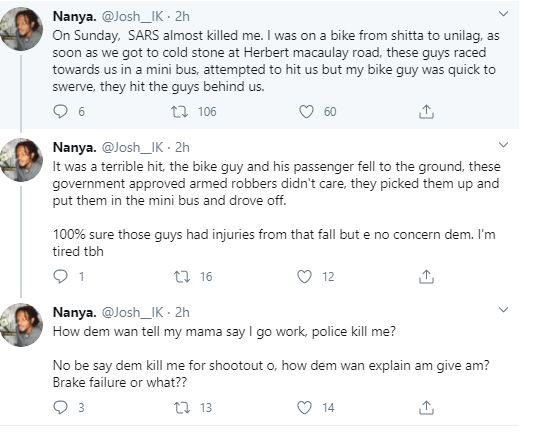 A photographer took to Twitter to alleged that SARS officials almost killed him on Sunday, September 27.

He claims he was on a bike from Shitta to Unilag when SARS operative raced towards them with a minibus and attempted to hit them but his motorcyclist swerved just in time and another motorcyclist and his passenger were hit.

He wrote: “On Sunday, SARS almost killed me. I was on a bike from shitta to unilag, as soon as we got to cold stone at Herbert macaulay road, these guys raced towards us in a mini bus, attempted to hit us but my bike guy was quick to swerve, they hit the guys behind us.

“It was a terrible hit, the bike guy and his passenger fell to the ground, these government approved armed robbers didn’t care, they picked them up and put them in the mini bus and drove off. 100% sure those guys had injuries from that fall but e no concern dem. I’m tired tbh

“How dem wan tell my mama say I go work, police kill me? No be say dem kill me for shootout o, how dem wan explain am give am? Brake failure or what??”

Why I Stopped Attending Church In Nigeria

Anything You Say About My Child Goes Back To You