According to him, while working in a spa in his final year, he realized that any woman can cheat when the mood is right. 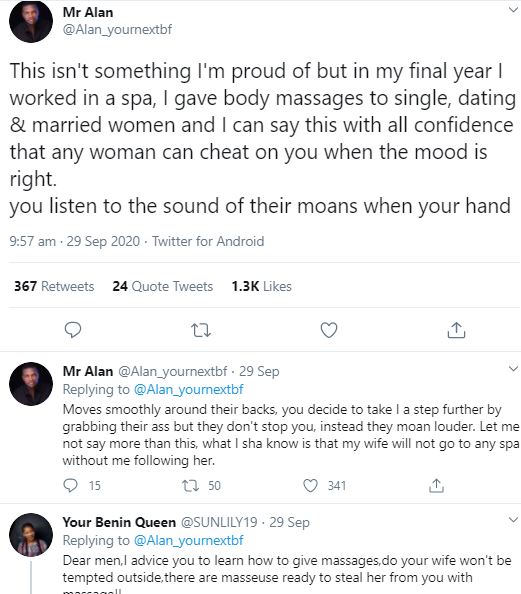 A former masseur has disclosed why he will never allow his wife to go to a spa alone because of his experience while working in one.

Mr Alan took to Twitter to state that from massaging Nigerian women while working in a spa in his final year, he realized that “any woman can cheat on you when the mood is right.”

He tweeted: “This isn’t something I’m proud of but in my final year I worked in a spa, I gave body massages to single, dating & married women and I can say this with all confidence that any woman can cheat on you when the mood is right.

“You listen to the sound of their moans when your hand moves smoothly around their backs, you decide to take I a step further by grabbing their ass but they don’t stop you, instead they moan louder.

“Let me not say more than this, what I sha know is that my wife will not go to any spa without me following her.”

Video Of One Corner Crooner, Patapaa Picking Money Sprayed On Him...