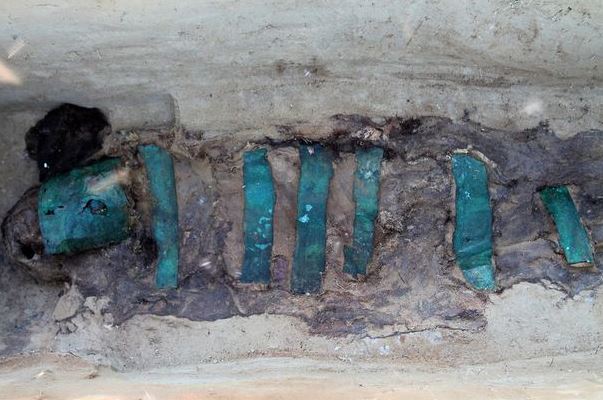 The remains of a 16th-century boy have been found revealing he was buried with a copper cauldron on his head preparing him for the afterlife.

Archaeologists have been left stumped by the discovery and admitted they have never seen a ritual like it.

The child, which would have been around six or seven, was buried with an earring of copper wire and decorated with a green glass bead.

He was armed with an iron knife and a copper cauldron helmet when he was laid to rest.

Another puzzling factor of the burial is that the handle of the cauldron was tucked into the boy’s belt.

The grave was found near Lake Bolshoy Poluisky Sor in northern Siberia, and has left archeologists scratching their heads.

Alexander Gusev, of the Scientific Centre for Arctic Studies in Salekhard, said: “This is the first time we have seen a cauldron used as a helmet.

“This find shows a change in the burial rite for people living in western Siberia in the 16th century.”

Cauldrons are more commonly found on top of a grave but never usually on the head of the deceased.

The unusual grave was one of 16 burials in a made-made mound.

The boy was laid to rest on his back, with his legs stretched towards a nearby river, say archaeologists who have not yet shown the poorly-preserved human remains.

Near his head was an iron scoop and a piece of silver foil, said Gusev.

Further study of the unusual necropolis is planned next year.

Imo Govt Lists Over 33 Looted Items To Be Recovered From...