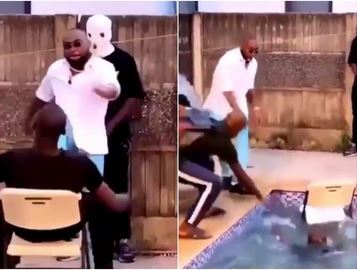 A video has emerged online showing the moment Davido pushed a man inside a pool during a video shoot.

The video currently going viral online showed that the singer was on a video shoot for one of his songs.

In the video, three men wearing black outfits and covered in white masks were seen standing behind the singer.

A young man was seated on a chair with his back turned to a swimming pool and the singer who was donned in a white and blue outfit pushed him into the pool while a cameraman was on standby to capture the event.

As soon as Davido pushed the man into the pool, he turned away from him. However, the moment he glanced back, he saw that the man was struggling to get out of the water.

The FEM crooner immediately ran to the side of the pool as other members of the crew also joined to assist him in bringing out the man.

As expected, Nigerians had something to say about the video. Many blamed the man who was pushed into the pool for taking such a job when he knows that he cannot swim while some noted that Davido’s reaction to the event showed how caring he is.

digestng - October 19, 2020 0
Tacha Former BBNaija housemate, Tacha has accused the Edo State government of being behind the release of inmates who escaped today, October 19 during...

digestng - October 19, 2020 0
Muhammadu Buhari   Nigerians youths have every right to protest peacefully, the President Muhammadu Buhari has declared.   Buhari made this known during a meeting with the...

Kiddwaya Was Evicted Because Of His Billionaire Father – Samklef Says

Obaseki Maintains Lead After 12 LGAs, Now Leading Ize-Iyamu With Over...

Mass #EndSARS Protest Erupts In Abuja As Nigerians Vow Not To...