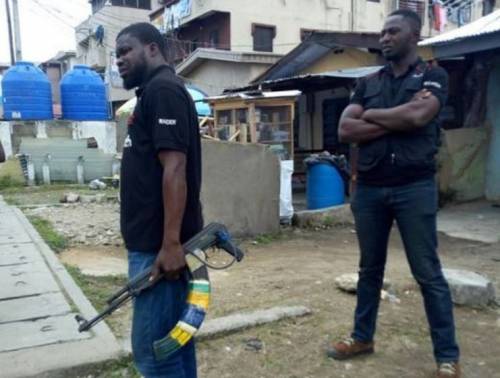 Recounting his ordeal with SARS, the Nigerian, who does not want to be named for safety reason, said his friend and him were forcefully arrested, adding that the SARS officials threatened to kill him if he attempted to contact anyone for help.

Describing the SARS officials as “real demons”, the youth said despite not finding anything incriminating on him, the officials demanded N1m before they would be released.

He said, “After checking our phones and finding nothing, they told my friend to get down from the car and get into their bus. He complied.

“In the car, they started to threaten me. Telling me how they will lock me up, chain me and no one would do anything about it.

“They told me that if I tried to call out for help again, they will shoot me and throw my body down and no one would find me. These guys are real demons.

“After driving for about one hour, they asked us to pay them N1m, which I asked why?”

He revealed that the SARS officials tortured and brutalised them while driving around the state.

He stated that he paid a sum of N100,000 to gain his freedom from the unjust arrest from the men.

“Seeing that we weren’t about to give them the money, they ended up bringing it down to N100,000, which they drove us to Zenith Bank along Osolo way, opposite SOS home where they made my guy get down from the bus to withdraw the money from the ATM.

“After they got the money, they let us go. Till now I still do not know my crime,” he said.

Nigerians have renewed the call for the scrapping of SARS following fresh extrajudicial killings of some youth.

Young People on social media also called for total rejection and reprisal attack against the unlawful activities of SARS operatives with the hashtag #WarOnSars.

Reacting to the outcry, the Nigeria Police Force has banned the Special Anti-Robbery Squad and other tactical squads from routine patrol as well as stop-and-search.

Inspector-General of Police, Adamu Mohammed, in a statement on Sunday, banned the unit from engaging in routine patrol at the federal, zonal and command levels.

Oh No! Ex-Kogi Council Chairman Dies After Being Shot By Gunmen

How I Turned Agbero To Survive During COVID-19