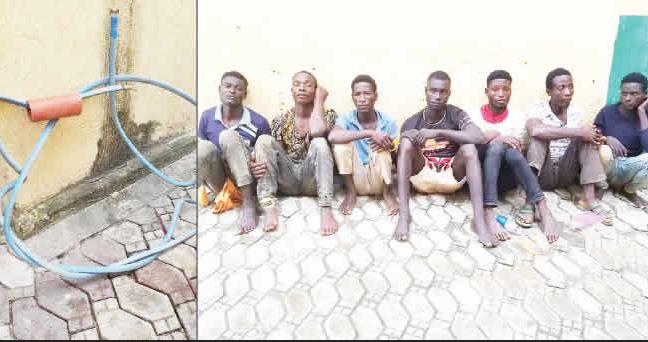 Kabiru Ismaila, a suspected vandal, has been electrocuted while allegedly stealing a transformer cable in the Adamo area of Ikorodu, Lagos State.

According to PUNCH Metro, it was gathered that Ismaila led some hoodlums to Owu Ikosi Street in Agbowa to steal the transformer jumper cable, which supplied power to the community.

While vandalising the transformer, he was said to have been electrocuted.

A resident, who identified himself as Seun, said other members of the gang fled the scene after Ismaila gave up the ghost.

He said, “Some hoodlums came to vandalise the transformer. As they cut the jumper cable, one of them became electrocuted; others quickly ran away. The matter was reported to the police. In the course of investigation, they found a jumper cable in a house around the place.”

Our correspondent learnt that eight suspects were arrested in connection with the incident.

One of them, Isiaku Ibrahim, 32, denied involvement in the act, adding that he did know Ismaila.

The Head of Corporate Communications of Ikeja Electric, Felix Ofulue, who confirmed the incident, urged residents to protect electric facilities in their areas.

He said, “We have realised that the rate of vandalism on our network is becoming alarming. We have been collaborating with security agencies to ensure that we bring all these vandals to justice, but we are encouraging residents of various communities to put extra measures in place to safeguard these assets.

“This is because the resultant effects always affect them and the replacement of these vandalised transformers also derails our plan because funds that we are supposed to use for upgrading our facilities will be used to replace stolen cables and other assets.”

Adejobi said, “On September 24, 2020, around 9am, a youth leader, Ganiyu Adesanya, of Owu Ikosi, reported that around 1.50am, a group of Hausa boys, led by one Kabiru Ismaila, 26, who also stays in the same area, came and vandalised their transformer and in the process, got electrocuted while trying to steal the transformer cable. The corpse has been deposited in the Ikorodu General Hospital’s mortuary.

“We have arrested some suspects on the matter and a cable was recovered from the house of one of them. Although the recovered cable was not part of the one stolen when the transformer was vandalised, investigation revealed that they have been vandalising transformers.

“Eight suspects were arrested, and if they are saying they are not involved, that is their own defence; the onus is on us as the police to make sure we get the facts. So, we have widened the scope of our investigation.”

Feminist Footballer Refuses to Observe One Minute Silence In Honour of...

Why Angry Nigerians Protested Against Buhari’s Medical Trip In London