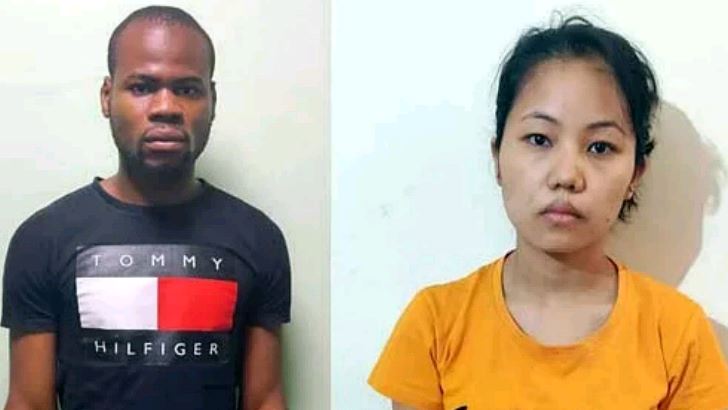 A Nigerian man and his Indian girl friend have been apprehended by the Cyber cell police in Bhopal, India for duping people on the pretext of sending them expensive gifts.

The accused identified as Augustine Udekwe and Lalhmunsiyami were arrested from Delhi, police said on Tuesday, October 6, adding that both accused lived together as lovers and pretended to be British citizens in order to defraud their victims.

Udekwe has been living in India since 2015. His visa has expired. The police have written a letter to the embassy post his arrest in the case.

Giving details on their modus operandi, police said they would befriend women and men on social networking sites after thorough research. They would then take their contact numbers and would start chatting on WhatsApp.

After befriending and taking them into confidence, the accused would call them and say that they have sent a gift to them from the US and UK. Later, the victim would receive a call that their gift has arrived and they will have to pay customs duty.

The victim would pay customs duty amount sought by the accused in a bank account. Once the amount was deposited, the accused would stop contacting the victims who kept waiting for their gifts.

According to a cyber cell officer, most victims hesitate in approaching police after being duped. This is the reason that police do not have the exact number of people duped by them.

The recent arrest was made after a woman filed a complaint with police. According to the police, on 07 August 2020, a Bhopal-based woman lodged a complaint that she had befriended a British young man on social media, who told her he will send her an expensive gift.

A few days after the conversation, the girl got a call from someone who claimed to be a customs officer. The person told her that a very expensive gift was sent to her and she has to pay delivery, penalty charges and money laundering fees otherwise legal action will be taken against her.

According to her, she got scared and deposited about Rs 3 lakh 5 thousand in the accounts. After depositing the money, the fake customs officer demanded for more money but when she refused the person stopped talking to her. That was when she lodged a police complaint.

The cyber cell police immediately launched an investigation. Both the accused were arrested by police from Mahavir Inclave Part-2 Uttam Nagar in Delhi.

Police said a similar fraud was reported in September 2019 wherein the accused had duped victims of Rs 71 lakh. One of the accused in the case is on the run.

What Lawan And Gbajabiamila Have To Say To The Youths After...

Media Personality, Stephanie Coker-Aderinokun Responds To Those Attacking Her Over Her...