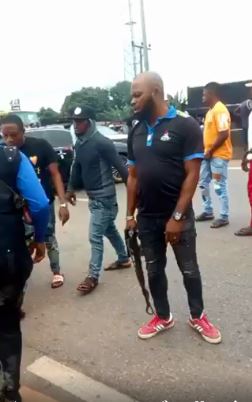 Some operatives of the Special Anti-robbery Squad of the Nigeria police have been left stunned after one of the operative had his phone reportedly stolen.

The incident it was gathered reportedly happened in Edo state.

It was gathered that the SARS operatives were on an illegal stop and search patrol when the incident happened.

In the video, the SARS operative could be seen frantically looking for his phone while a crowd of angry youths gathered.

I Knew It Could Be My Last Show For Speaking Truth...