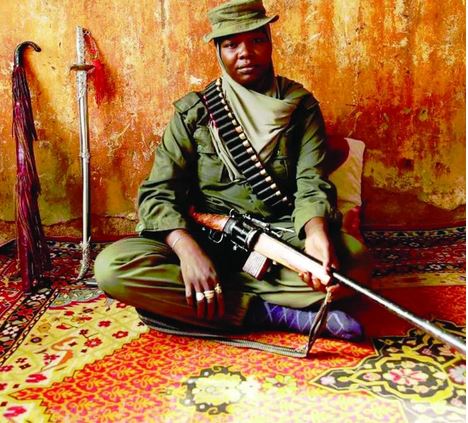 It’s often said that what a man can do, a woman can do even better. This saying has been proven to be true in the North-Eastern region of Nigeria, which has been the theatre of war between the forces of evil (Boko Haram terrorists) and good (the Security agencies and the poor masses) for about 11 years.

In Adamawa State, one of the states being ravaged by the Boko Haram, considered the third most dangerous terrorist organisation on earth after Al Qaeda and The Islamic State,  lives a queen by all standards, by name, Sarauniya (Queen) Amina Bakari Gombi, a  wife, mother, hunter, warrior, and tailor.

Due to her exploits as a warrior, she has entered the folklore of the locals just like the legendary Queen Amina of Zazzau, Hausa warrior queen who ruled in the mid-16th Century.

Perhaps, one can confidently say that Queen Amina has come alive in Aisha Gombi, Queen Hunter and nemesis of Boko Haram fighters. At a time when many, including men, were running away from the insurgents who were raiding communities, maiming, killing raping, and abducting men, women, and children, and razing down villages, Aisha stood to be counted.

She decided to use the gift God gave her, hunting skills, to protect her people, rescue the captured, especially women and children, from Boko Haram enclaves. Aisha is among the many hunters enlisted by the Nigerian Army to track and capture Boko Haram fighters.

In this chat with Vanguard, the beautiful, brave, bold, and dauntless Aisha speaks on several issues including the reason she joined the war against Boko Haram and amnesty for the insurgents, noting that her driving force is freedom for her people and Nigerians at large.

According to the soft-spoken Queen Hunter, a sobriquet she got from appreciative hunters and locals whose lives and livelihoods she has helped to save, becoming a hunter, a profession seen as an exclusive preserve of men, was a calling. She was born into a family of hunters and she inherited the profession from her father who inherited it from his own father.

As a young girl growing up in her village in Adamawa State near the Sambisa forest, the Boko Haram enclave, she would go hunting for guinea fowls, antelopes and baboons with her grandfather. In the course of time, she became proficient as it is said that practice makes perfect.

Joining the fight against insurgency

Speaking on why she joined the fight against the insurgents, Aisha said she saw the way the terrorists were killing innocent and defenseless people, destroying property, abducting people, and razing whole villages.

The tigress in her couldn’t keep calm when her village came under attack; so when others were running away, she decided to stay back and fight. There was no way she could watch the terrorists take over her beloved hometown without a fight. She was determined to give the terrorists a run for their money. Perhaps, she, like Queen Esther in the Bible, Aisha was prepared by her creator for a time like this. People couldn’t believe it.

They felt she was out of her mind, trying to attempt the impossible.  They must have given her the popular Hausa adage: Karambani akwiya, gai da kura which means (it was pure meddlesomeness on the part of the goat to think she could greet the hyena without disaster. i.e. Don’t attempt the impossible.) But Aisha was ready to face the terrorists.

Then the opportunity came for her to officially join the fight. She did not hesitate to grab it with both hands. In her case, it was an opportunity meeting with preparedness. The Nigerian military engaged in this unconventional war with Boko Haram knew that to win the war, intelligence-gathering was non-negotiable and who can better give the needed information than the locals especially hunters and vigilantes who know the nooks and crannies of the area!

She volunteered to use her talent to help save her people and country from terrorists. Aisha was one of the few women recruited by the Nigerian military as volunteers to fight Boko Haram on an ad hoc basis. Even youths were not left out as the military formed an arm of the Joint Task Force, JTF, named Civilian JTF made up of civilians who went to war to protect their communities. Aisha said that the hunters know the terrorists’ hideouts in the forest better than the soldiers. Today, Aisha finds fulfillment in battling the terrorists and freeing their captives, mostly women and children.

Just as Boko Haram terrorists are said to be driven by ideology and not motivated by money or material gains, Aisha is not motivated by money but love for her people and country. She didn’t bat an eyelid when she had to sell her sewing machine just to raise money to purchase a more powerful rifle. A report by ABC in 2016 had said that ISIS terrorists feared the female members of the Zeravani unit, a branch of the Kurdish Peshmerga (Black Tigers) so much that they are referred to as ISIS’ nightmare. It is said that ISIS fighters fear them because it is a taboo for them to be killed by women so they steer clear of the female fighters. Aisha boldly says that Boko Haram terrorists know her and fear her. She is in fact, a terror to the terrorists.

Aisha’s attitude and her love for hunting endeared her to many women who were influenced to become hunters so today, Adamawa State boasts of almost 100 female hunters. She said she enjoys the support, encouragement and cooperation of the locals, particularly the women.

She said the major challenge the hunters face is convincing the military to allow them to go on rescue missions. Perhaps, the military is afraid for their lives. Another challenge is funds as hunters sometimes have to raise the money for ammunition and to hire and fuel vehicles. Despite all these, Aisha said that any time she goes to the bush, she feels very happy.

On how she combines her duties as a wife, mother, commander, tailor, hunter, and warrior, Aisha said she has no problem juggling her responsibilities at home and outside the home. She said she handles her domestic affairs in the way an any good wife would handle her domestic affairs and also handles her work as a warrior very well. Above all, her husband has been very supportive and is in fact, very proud of her. He believes that her success is his success.

On whether she has ever regretted joining this war which entails leading the hunters under her command deep into the forest in search of the terrorists and their captives, she said never! She enjoys fighting for her people and bringing smiles to their faces. She, however, appeals to the Federal Government to equip the military and the volunteers with more sophisticated weapons.

She said she and her team sometimes spend so many days in the forest searching for terrorist hideouts and when they capture the terrorists, they force them to lead them to where the victims are kept, then the terrorists are handed over to the military while they rescue the victims. Her team has rescued a huge number of captives and captured many Boko Haram fighters.

Multi-talented Aisha does not only hunt for animals and terrorists, she is also a tailor. She said tailoring has helped her to meet some of her financial needs. She advised women to ensure they don’t just sit at home and wait for the man to provide all their needs.

On amnesty to repentant Boko Haram fighters by the Federal Government, Aisha said if they are truly repentant, then it’s good but if the repentance is not genuine, then it’s bad. She said that when they repent, they are kept in a place where they are closely monitored and their habits reviewed before they are released into society so it’s between the terrorists and government.

Joro Olumofin Advices Men On How To Test If A Woman...

Lion Killed In Borno Town After It Killed Some People And...

“I Was Gay Before You Were Born”