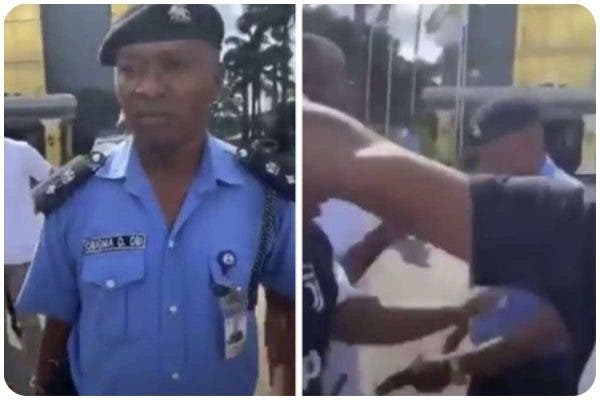 The DPO threatened to shoot the protesters in Owerri

A Divisional Police Officer (DPO) who brought out his pistol to shoot protesters in Owerri, Imo State may have landed in serious trouble.

This comes after the Nigerian police authorities reacted to the video trending on social media.

He also physically assaulted some protesters.

There has been a nation wide protest, as youths from different states stage protests against police brutality and SARS.

The youths asked the police man why he punched the young protester, the DPO brought out his pistol to shoot all of them .

The sad video has been making ground on social media, as Nigerians calls for the immediate arrest of the police man.

Reacting to the shocking video, the complaint unit of the Nigeria Police Force wrote;

Your complaints have been forwarded to the appropriate authority for necessary action. Thank you.

Your complaints have been forwarded to the appropriate authority for necessary action. Thank you. https://t.co/EI5juyhj7D

See Rare Photo Of BBNaija Housemate, Laycon And His Mother

“Fame Should Make You Make Money, Not Waste It” – Korede...