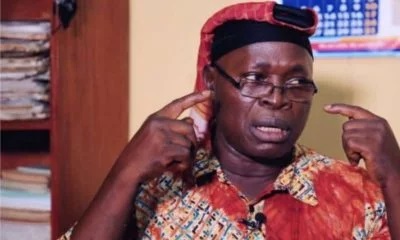 Governor Abiodun had gifted Laycon, whose name is Moshood Olamilekan Agbeleshebioba, N5m, a house and an appointment as the Ambassador of the Youth in Ogun State.

MURIC stated this in a statement by its President, Professor Ishaq Akintola.

According to MURIC: “We are miffed by Governor Abiodun’s action. What does he think he is promoting? A whole governor is idolizing indecency and encouraging greed and materialism. It is disappointing, disgusting, misplaced and myopic. This is happening at a time millions of young men and women are roaming the streets of Oke Agbede, Itoko and Asupopo in the state’s capital in search of jobs that are not there. That N5 million could have evacuated twenty-five area boys from Panseke, Lafenwa and Ashero, all in Abeokuta. These are roads that the governor himself plies every day and he sees abject poverty printed on the faces of the youth.

“It is misplaced priority. What is in BB Naija that the governor has to waste the resources of Ogun State on a contestant who had already been over-pampered by the organisers? Afterall Moshood received a whopping N85 million, a car and a house from the organizers. Why give him a house again when he had already been given one? Is it a reward for hard work, intellectual display or what? How old is the winner? BB Naija is a cornucopia of repulsive, nauseating and Bohemian behavior. Or what does Governor Abiodun think of open sex on television being watched by all and sundry, including our underaged children? It is a big shame.

“The Muslim Rights Concern is deeply concerned that even our traditional rulers all over the country failed to add their voices to that of the Ooni of Ife, Oba Adeyeye Ogunwusi, Ojaja II, when he called on the Federal Government (FG) to ban BB Naija. No single traditional ruler spoke in support of that clarion call.

“FG must also take responsibility for the damage this irresponsible programme has done to the psyche of Nigerian youth. How can we allow a foreign idiosyncracy to bastardise the values and norms which we hold very dearly in our land? It is not Nigerian if it is not Nigerian.

“The Glorious Qur’an says, ‘Evil has appeared on land and sea because of (the evil) which men’s hands have committed, so that He may make them taste part of that which they have done, in order that they may show remorse. (30:41)”