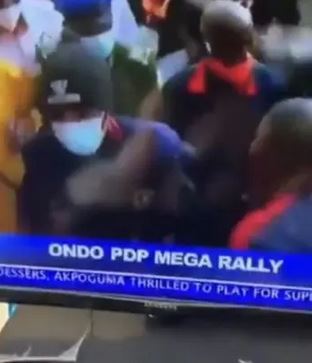 The Moment Thugs Removed Ex-Governor, Ayodele Fayose’s Cap And Threatened To Deal With Him At PDP Rally

A video has surfaced online showing the moment some unidentified hoodlums removed the cap of former Governor of Ekiti state, Ayodele Fayose.

The incident happened at the People’s Democratic Party (PDP) final rally for its Ondo governorship candidate, Eyitayo Jegede. The thugs in the viral video also threatened to deal with Ayodele if he continues speaking at the Ondo rally.

He was later escorted to his seat by security operatives who protected him against the thugs.

Fear As Charm Is Spotted At Nigerian Embassy In France (Video)

“Agbani Darego Did Not Bleach Or Surgically Enhance Herself”

How A Man Got Crushed To Death During Task Force Raid...