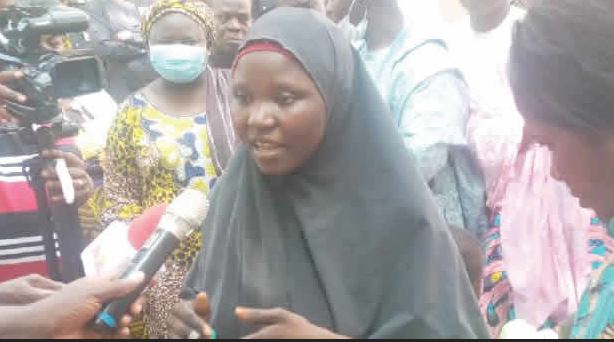 Some persons who are said to be human traffickers have been arrested by the Gombe Police Command recently.

The police also rescued 12 kidnapped children allegedly sold to human traffickers in Onitsha, Anambra State. The children were said to have been abducted while playing at their respective neighbourhoods. One of the suspected traffickers, Hauwa Usman, tells CHIMA AZUBUIKE how they carry out their operation

Why are you into the business of child trafficking?

I was told by some people to get a child for them. While looking for children to kidnap, I found a two-year-old child that I took to them. Unfortunately, I know the parents of the child. We are discussing how we can find the children. I hope to take them to Anambra State to look for the child.

How much are you paid for each child you give to the people you give the children to?

I get about N300,000, depending on the sex of the baby. That also takes care of my transport from Taraba to Gombe. Nkechi (one of the suspects) has received seven children while Faith (another suspect) has received more than 10 children from me. They pay N250,000 for a female child and N300,000 for a male child.

What do they do with the children?

I have repented now because as a mother I feel bad knowing that I kidnapped children and gave to them. Some of them use the kids for rituals – to make money. That is why I repented and turned to God. I promise to help the government recover as many of those children as possible.

I didn’t know children I paid N300,000 each for were stolen –Suspected human trafficker

Nkechi Odilinye, 54, and three others were arrested by the police in Anambra State for alleged human trafficking. One of the other suspects alleged that Nkechi bought seven children from her for about N300,000 each.

I’m Mrs Nkechi Odilinye from Amanfo Nkpor, Idemili North in Anambra State. I run World Peace Motherless Babies’ Home or Community Children’s Home and it is duly registered. I started it in 2014 but in 2019, the state government warned against child adoption so I stopped.

What brought you here?

I was arrested in my orphanage in Anambra.

How do you get the children in the orphanage? Some of them are the children of people who work in my orphanage. Also, if you have a child you don’t know how to raise, you can bring the child to us but you will pay monthly for their upkeep. As an organisation, we accept such children. Anambra State Ministry of Women Affairs has the names and records of the children because we usually share information about all the kids in the orphanage.

How come you received children all the way from Gombe in Anambra State?

Alhaji Ali Bala Shukari (one of the suspects) brought seven children, but it was in 2018. I interrogated them to know whose children they were and I was told that their parents were killed by Boko Haram and that they were orphans.  I asked if the children were stolen but they swore that they didn’t steal the children. I told them further that as an Honourable member who is willing to contest again and as Nigeria’s representative at World Peace Society, I could never soil my integrity. However, they collected N250,000 for each girl and N300,000 for each boy and I gave the babies out for adoption. I put them up for adoption at about N750,000 (each).

Do you have children? How come you are doing this business?

Did I know that they were stolen?

One of the suspected human traffickers arrested by the police in Gombe State, Alhaji Ali Bala Shukari, 39, tells CHIMA AZUBUIKE how he got involved in the matter

I’m a mechanical engineer; I went to Taraba State Polytechnic.

What was your role in kidnapping and selling babies in Gombe State?

To be sincere, I know Nkechi. In fact, I took two of my children to her to train them and not to sell them. I have an ex-girlfriend, Hauwa, who wanted us to start a business but I declined. I told her I wanted my children to be brought up in the Christian way; that was why I took my children to Mrs Nkechi Odilinye for her to bring them that way. I made up my mind to take two children to her: Emmanuel Theophilus Shukari and Happiness Theophilus Shukari. I didn’t go to anybody’s house to kidnap any child. Even if I’m given a Quran, I will swear that I didn’t kidnap any child.

What else do you know about the business?

I am ashamed of my actions. If the state government will help me, I will help the government to locate all the children because I want my children to come back home. I will show them where the woman (Nkechi) keeps the children. Hauwa used to be my friend; we were in a relationship until the last one and a half years.

So how much did you receive as payment for the children?

They are my children. Even if I give them out or get something, it is not your business. They are mine.

Secretary of the amalgamation of parents who lost their children through human trafficking in Gombe State between March 2018 and October 2019, Mr Ibrahim Ardo, tells CHIMA AZUBUIKE about the loss of their children has brought to them

What have you done to get your children back?

I have been following the issue and urging the police to investigate the matter. We reported the matter at Gombe Police Division when it first occurred and also went to the state Criminal Investigation and Intelligence Department to report. Then we heard that some women were caught in Anambra State with two male children who were in the news at that time as missing children; that was how we formed the union with the permission of traditional rulers. We saw that the children that were rescued were kidnapped the same ours were kidnapped.

How many children did you lose?

I lost Hauwa Ibrahim, who was three and a half years old. It happened on December 20, 2018. I saw Hauwa Usman (one of the suspects) in our house; she came to our house around 11:30am in Tudun Wada.

Has she confessed that she stole your child?

Yes, she has confessed that she took my child but my child is not among the ones that have been found.

How many of the children are left out of the ones believed to have been taken from Gombe State?

Nigerian Man Celebrates As He Wed His White Fiancée (Photos)

Nigeria Does Not Have Enough Freezers To Store Pfizer Vaccine When...