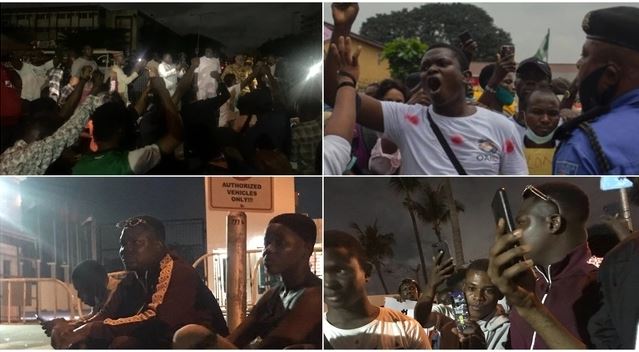 Nigerian youths led by comedian, Mr Macaroni, have taken to the streets yet again to address the issue of SARS brutality this time even at night.

The youths in Lagos stayed up late into Thursday night protesting that the unit be scrapped totally, ChannelsTV reports.

In recent times, the activities of the police unit have come under scrutiny and several members of the squad have been found guilty of using their position of authority to trample on the rights of citizens, especially the youths.

End SARS protests were held in various locations across Nigeria on Wednesday, however, while many thought the noontime demonstrations would be all for the day, a group of young people led by Mr Debo Adebayo, a comedian popularly known as Mr Macaroni, stormed the premises of the Lagos Assembly, asking that the lawmakers pass legislation that will see to the disbandment of the SARS unit in the Nigeria Police Force (NPF).

The youths decried the constant harassment encountered in the hands of SARS operatives, lamenting the rate at which many young creatives are being battered and killed by the ‘ruthless’ police officers in the squad.

Mr Macaroni and the other youths spent hours at the gate leading into the Lagos Assembly complex, seeking to see Governor Babajide Sanwo-Olu who they were told was as expected not in office at the time.

Officials and other members of the parliament tried to persuade the angry youths to leave and return at dawn, but they held their grounds and insisted that they would not leave till the number one citizen in Lagos addresses them and assures them that they would work to ensure and end if brought to the ‘menace’ that SARS has become in the country.

“If we say we want to see the one that we elected into office, it is not too much,” Mr Macaroni insisted while addressing an official of the Lagos legislature.

After a long while of waiting which tapered into the early hours of Thursday, the Speaker of the Lagos House of Assembly, Hon. Mudashiru Obasa, finally arrived at the scene to address the protesting youths.

Mr Obasa told the crowd that members of the parliament will hold an emergency meeting in the morning of Thursday to deliberate upon the #ENDSARS concerns.

He promised it will not be a deliberation by only the legislators, as the governor and all other stakeholders concerned will be at the meeting.

The speaker apologized for the ordeal that the youths have been through while staging their protest at the gates of the parliament, and assured them that a lasting solution will be found for the issues that have been tabled.