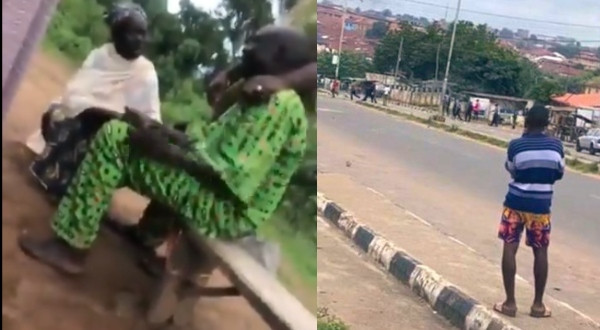 The father of Jimoh Isiaq who was killed during an #EndSARS protest has been caught on camera weeping.

A truly heartbreaking video of Jimoh’s father weeping uncontrollably after his son was killed at an #EndSARS protest has gone viral after being shared online.

Recall that Governor Seyi Makinde had confirmed that a young Nigerian was shot dead at the #EndSARS protest which held in Ogbomoso yesterday October 10.

It was further learnt that Jimoh’s father who is a driver, arrived home to meet the corpse of his son after getting a call that he’s been shot.

It is being alleged that Jimoh was shot by a policeman during the protest in Ogbomosho , but the Oyo state police command has denied the report stating that non of its officers was involved in any shooting.

“The Police did not fire a shot or kill any protester as widely circulated.” Oyo state Commissioner of Police, CP. Joe Nwachukwu said in a statement.

digestng - March 3, 2021 0
Rochas Okorocha   The Governor of Imo state, Hope Uzodinma has been accused of paying N1 billion to ensure that Senator Rochas Okorocha is recalled...

digestng - March 3, 2021 0
File photo Three Fulani herdsmen who were accused of kidnapping and killing a farm owner in the state, Oluwole Agboola have been arraigned by...