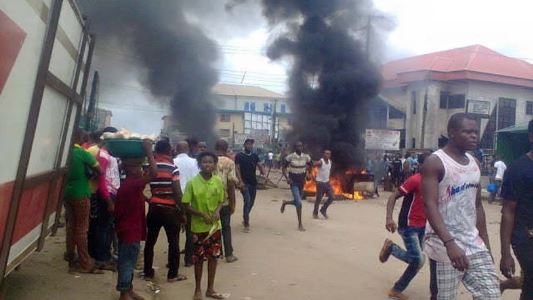 A man accused of stealing a motorcycle has been lynched by an angry mob in Dusen Kura Gwari, Bosso Local Government Area of Niger state.

The sad incident happened on Sunday.

Police Spokesman in the state, ASP Wasiu Abiodun, disclosed this in a statement issued in Minna on Sunday.

Abiodun said that on Sunday, at about 9:50 am, the police received a distress call that a mob had attacked an unknown person along Dusen Kura Gwari area.

According to him, a patrol team was mobilsed to the scene and sighting the patrol vehicle, the people took to their heels and abandoned the victim.

Abiodun said the victim was immediately rushed to the General Hospital, Minna, where he was confirmed dead.

“Preliminary investigation revealed that the deceased was accused of motorcycle theft,” he said.

Meanwhile, the spokesperson said further investigation into the incident is ongoing with a view to arresting the attackers.

He warned members of the general public to desist from any act of jungle justice as the command will not condone what he called “self-help approach to justice”.

digestng - June 25, 2021 0
Chidimma Adaora Ojukwu, the suspected killer of SuperTV boss, was last seen in the University of Lagos (UNILAG) before the Covid-19 lockdown, The...

Oh No! Plateau Monarch, Bulus Janka Has Been Assassinated