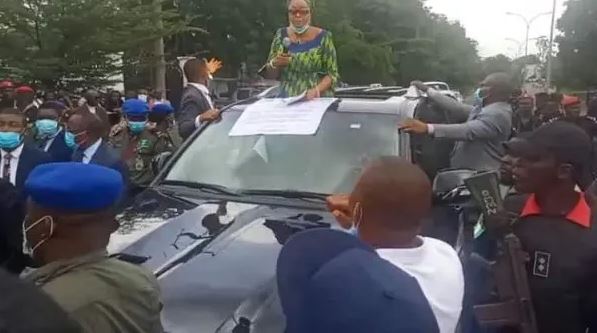 Mrs Cecilia Ezeilo, the Enugu state deputy governor has joined Nigerian youths to demand an end to police brutality in the country.

In photos which have surfaced online, the  Enugu state deputy Governor Mrs Cecilia Ezeilo could be seen among the protesters as she joined calls for police reforms.

The move has been widely commended on social media, as many youths have called on other public office holders to join the movement.

Man Kills Huge Python In Bayelsa, Plans To Sell It For N10,000

The Ugly Stories Of How Widows Are Maltreated In Igboland

digestng - October 21, 2020 0
The Suspects Two ladies identified as Jumoke Ayodele and Opeoluwa Temitayo have been arrested by the Ibadan Zonal Office of the EFCC, on...

Man Kills Huge Python In Bayelsa, Plans To Sell It For N10,000

The Ugly Stories Of How Widows Are Maltreated In Igboland

digestng - October 21, 2020 0
Some really heartbreaking stories have been told of how widows are treated in some parts of Igboland in this report by Vanguard. *** There are...