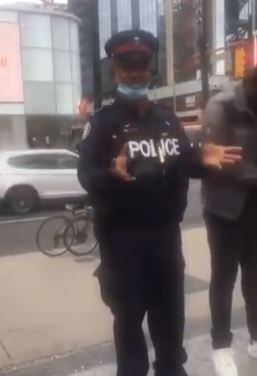 A Nigerian national who is a police officer in Canada was at the #EndSARS protest organised by Nigerians in Canada and gave his two cents on how the police force can be reformed.

While there, the officer encouraged Nigerians to keep protesting and he spoke about what needs to be done to permanently put an end to police brutality.

He said Nigerian needs to “get competent leadership” and “change the reorganization of the police force.”

He added: “Give more autonomous power to police in each state, instead of somebody sitting in Abuja and directing someone in Benin. So, that’s what we should be fighting for.

“End SARS is the beginning. The larger picture is, the IG has to go, we have to change leadership, we need to pay police more, we need to see how we recruit them, that’s what we should be fighting about.

Not All Bandits Are Criminals

Nigerian Lady Reveals How She Found Out That Her Boyfriend Of...