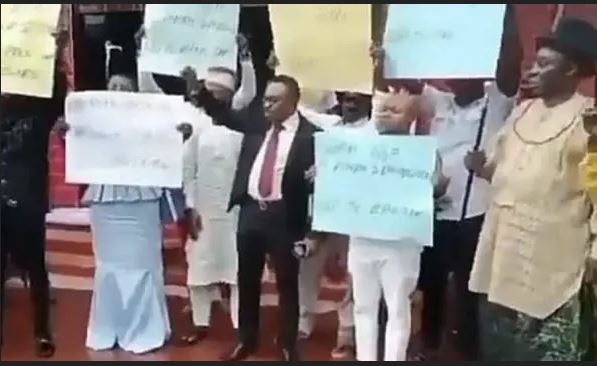 After the disbandment of SARS was announced by the IGP of Police, Mohammed Adamu on Sunday, October 11, some parents have protested against the decision.

The parents who came were spotted in a viral video, speaking against the disbandment of Sars across the country.

According to the parents, they do not want SARS to be disbanded by the government. They were seen in the video, raising their placards, and screaming that they want SARS.

Meanwhile, Nigerians have slammed them for taking such action, as they accuse them of selling their integrity.

If your papa or mama Dey here, forget making it in life.

E no fit better for una till una 7th generation and it’s that thing they want that’ll be the end of them. pic.twitter.com/dytfzw2HiQ

First-Class Mathematics Graduate Who Went Viral After Sharing Photos Of Himself Farming, Bags PhD Scholarship In US

digestng - March 5, 2021 0
Emmanuel Nworie A first-class mathematics graduate of the University of Nigeria, Nsukka, Emmanuel Nworie, has bagged a fully-funded scholarship at a university in the...

“Home Wrecker, Husband Snatcher and Scums of the Earth” – Reno...