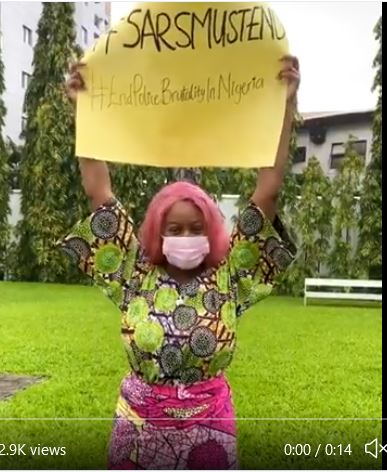 Nigerian disc jockey, DJ Cuppy has joined the #SARSMUSTENDNOW campaign days after she lamented about not being able to protest due to her mandatory isolation.

The billionaire daughter flew into the country from Dubai, a few days ago with the intention of joining the protests but was instructed to self-isolate in line with the COVID-19 laws.

In a video, DJ Cuppy could be seen holding a #SARSMUSTENDNOW placard, as she joined the calls for a full scale reform in the Nigeria police.

What was most intriguing about her protest was the fact that she did it under the rain, as she looked undeterred despite the heavy downpour.

Watch her protest video below;