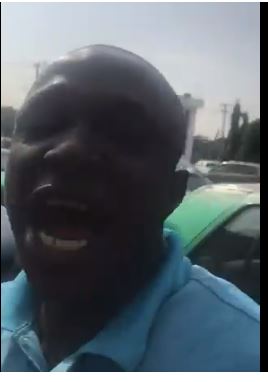 There was a huge chaos in Abuja as a taxi-driver and a young lady clashed after the cabbie and his friends said the protesters deserve to be killed by officials for having tattoos on their bodies.

In a video shared online, the cab driver and his friends are seen insulting a woman whose voice can be heard in the background.

The lady slammed the driver for his statement that Nigerian youths with tattoos are criminals who deserve to be killed and the driver hit back. They soon began insulting each other’s generations – the middle-aged vs the young.

Other older men joined the cab driver to insult the younger woman while telling her that most young people are criminals.

“You’re all the same thing… You’re all shameless,” the cab driver said of the younger generation and his friends agreed.

The woman said: “Your generation is the weakest link. Look at you people. You stole from the government, you got free education, you’re saying we should not protest… You think I belong to your generation of siddon look. Look at how you people destroyed Naija.”

The incident happened at Wuse zone 5 cab park in Abuja.