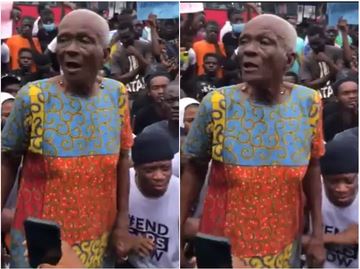 The woman speaking at the protest

A really interesting video has been shared online of an elderly woman speaking at an #EndSARS protest.

The video shows the woman, a grandmother speaking passionately against the Special Anti-Robbery Squad (SARS).

The protest is, however, still ongoing in some parts of the country as some Nigerians are not convinced that the atrocities being committed by the police will not continue.

The elderly woman, who urged the government to ensure that the police respects the rights of Nigerians, said having a tattoo does not make anyone a criminal.

The youths that participated in the protest can be seen hailing the elderly woman as she condemns the illegal activities of the police unit.

Nigerians took to the comment section of the post to commend the elderly woman after it was shared by a Twitter user with the handle @cybvr.