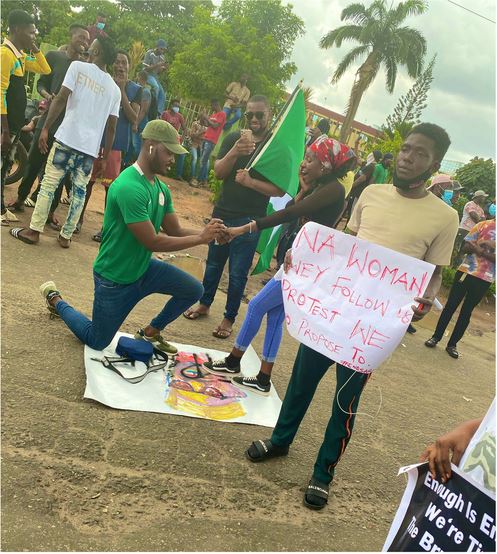 A Nigerian man has used the opportunity which the #EndSARS protest presented to propose to his girlfriend.

The young man identified as Demola on Twitter proposed to his lover on Tuesday, October 13, during the EndSARS moment.

What made the moment more interesting was that there were bystanders everywhere with their placards. 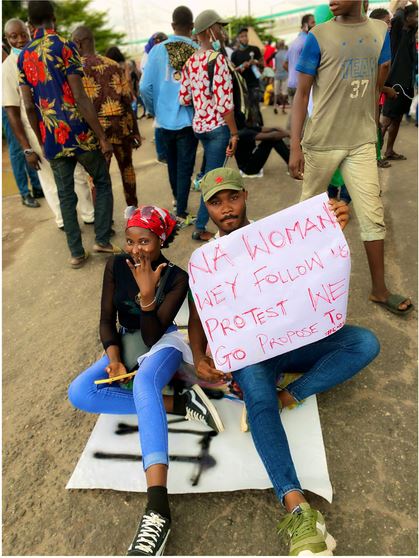 Close to the couple was a protest, perhaps the friend of the man, holding a cardboard which read”: “Na woman wey follow me protest we go propose to”.

Proposed to the LOML today & she said Yes. my friends were there to cheer me up… ☺️☺️ #SarsMustGoNow pic.twitter.com/ssxm4btiVz

The man was customarily on one kneel as he presented the ring to the lucky lady. In one of the photos he shared on Twitter, the lover showed off her ring.

The tweet gained massive reactions on the platform with over 15,000 likes. Many commented on the fact that the protest turned out well for them as others said they are ready to go all out to join the movement.

Man Arrested For Defrauding Victims By Impersonating As Superintendent Of Police,...

Bobrisky Reveals Plan To Give N1million To Family Of Late Jimoh...