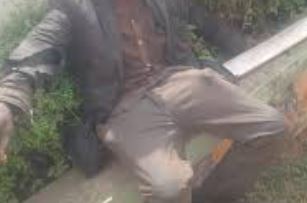 A mentally challenged man has killed a security guard after he repeatedly hit his head with a rod in Bomadi, Delta State.

The unfortunate incident took place on Monday at Our Lady of the Waters Cathedral of the Catholic Church in the coastal town.

A female worshipper at the church, who witnessed the incident and pleaded anonymity, said the unstable man identified as You-Boy was a regular visitor to the Cathedral at odd hours of the night.

She said, “We had our Harvest festival last Sunday and I was in the Cathedral counting money on that fateful night when the incident happened but was afraid to come out.

“The incident occurred at about 2am on Monday when this mad man was caught by a security guard when he was trying to sneak into the Cathedral.

“He often beats security and sneaks into the Cathedral where he would poo and pee on the altar, and mess up the auditorium and sneak out uncaught.

“Some months ago, he took the Lectionary from the altar and threw it over the fence which was found later. Some other times he would take away the lights on the Blessed Sacrament.

“So, he was caught that fateful night and as the security guard was dragging him to lock him up in a room, he picked a rod on the floor and hit his head repeatedly.

“The security guard became weak and fell on the floor, and the mad man fled with the rod in his hand.

“Paul called for help with a weak voice until his colleague, who was at the back gate, came and rushed him to Our Lady’s Hospital. He told his colleague what transpired before giving up the ghost”.

The mentally unstable man was still at large at press time.

#EndSARS: Future Proceeds From Lekki Tollgate Should Go To Victims Of...

Unfreeze My Bank Accounts Or Risk Serious Protests In South-West