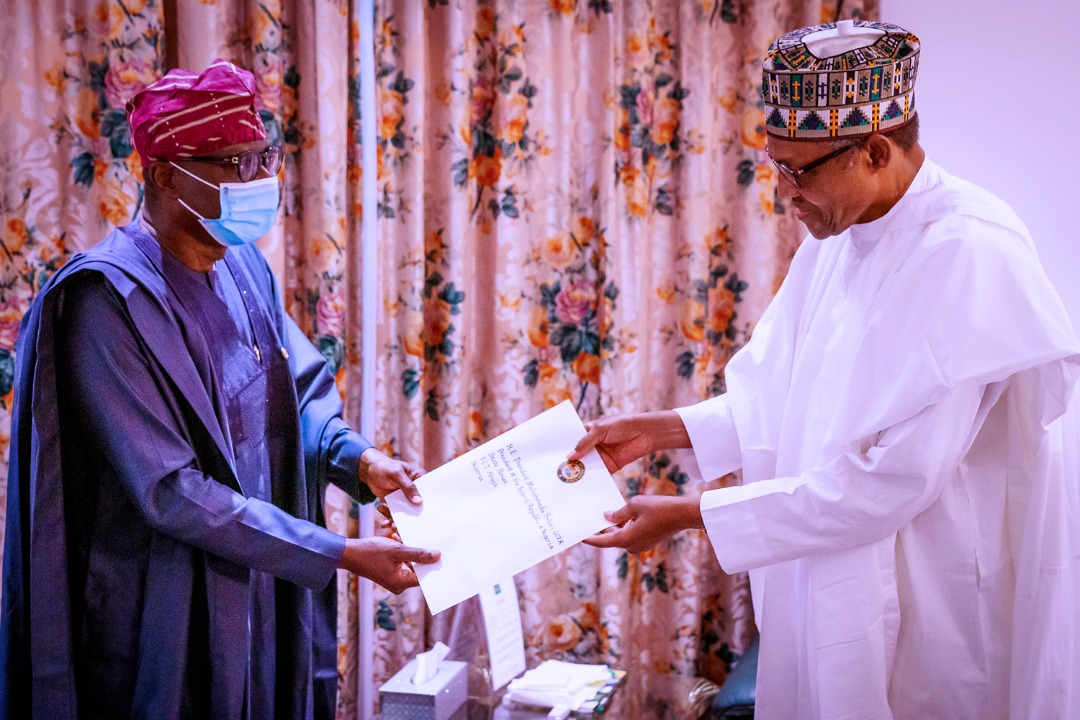 The Governor of Lagos state, Babajide Sanwo-Olu kept to his promise and met with President Muhammadu Buhari on Tuesday in Abuja to discuss issues bordering on police brutality and #EndSARS protests across the country.

According to the governor who took to Twitter to reveal details of the meeting, he presented a copy of the demands of youths protesting against police brutality and extortion in the country.

He explained that “the President restated his commitment to embark on a holistic reform of the entire Police Force.

While presenting the demands of the protesters officially to Buhari, Sanwo-Olu said, “They (protesters) said we should release all the protesters and we have released them.

“They said we should set up a Trust Fund to pay compensation to the families of those who have died. I have set up my own Trust Fund today and I have announced it.

“The third one, they said we should set up like a small enquiry for people that are bitter. So, tomorrow the IGP is coming to Governors’ Forum and he is going to ask each one of us to set up a five-man team.

“They would go to Force Hospital where they will go through a thorough medical evaluation. The ones that can still be absorbed; they will. Everything is working well.”

Sanwo-Olu on Monday and Tuesday addressed protesters in Lekki and Alausa areas of Lagos State, where he promised to meet with Buhari and the Inspector General of Police to present their case to them on the urgent need for Police reforms.

Just today, the President has approved a panel made up of Civil Society leaders to look at all the cases of abuse by the police.

The benefits of this genuine protest will be fully realized and I will continue to work to defend the rights of all Lagosians any and everyday. pic.twitter.com/f4dSwnV2m7

Man Escapes Death By A Whisker As Speeding Tipper Rams Into Him In Rivers...

digestng - March 6, 2021 0
Man Escapes Death By A Whisker As Speeding Tipper Rams Into Him In Rivers A man identified as Raphael Abraham escaped death by a...

Six Nigerians Living In India Land In Serious Trouble After Being...

Wow! Chimamanda Adichie Lights Up Instagram With Adorable Video Of Her...