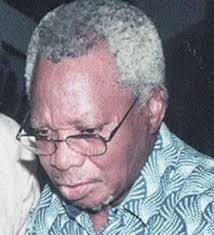 The President of Nigeria and the Governor of Edo state have both mourned the death of renowned poet and Emeritus Professor of Literature, John Pepper Clark.

President Muhammadu Buhari and Godwin Obaseki both expressed sadness over the death of the literary giant.

Recall that JP Clark died on Tuesday at age 85.

The professor’s death was announced in a statement by Prof. C. C. Clark and Ilaye Clark.

It read, “The Clark-Fuludu Bekederemo family of Kiagbodo town, Delta State, wishes to announce that Emeritus Professor of Literature and renowned writer, Prof. John Pepper Clark, has finally dropped his pen in the early hours of today, Tuesday, 13 October, 2020.

“Prof. J. P. Clark has paddled onto the great beyond in comfort of his wife, children and sibling, around him.

“The family appreciates your prayers at this time. Other details will be announced later by the family.”

John pepper Clark Bekederemo, born on April 6, 1935, was one of Nigeria’s foremost anglophone dramatists and poets.

Meanwhile, the President, Major General Muhammadu Buhari (retd.), on Tuesday paid glowing tribute to a Clark, saying he left an indelible mark in the literary world.

Buhari’s tribute to the deceased was contained in a statement by his Special Adviser on Media and Publicity, Femi Adesina, titled “President Buhari pays tribute to JP Clark.”

The statement reads partly, “President Buhari pays tribute to one of Nigeria’s finest poets, dramatist and recipient of the Nigerian National Order of Merit Award for literary excellence, whose repertoire of published works depicts the hard work of a great man, devoted to a lifetime of writing, knowledge and promotion of the indigenous culture of the Ijaw nation.

“Acknowledging that Prof. J.P. Clark’s exit has, indeed, left an indelible mark in the literary world, President Buhari takes solace that his body of literary works, which earned him recognition and respect both at home and abroad, would continue to inspire upcoming Nigerian writers to pursue literary excellence and flourish in their chosen vocation.”

Obaseki described the deceased as a great academic and a celebrated poet, whose literary exploits brought honour and great respect to Nigeria.

He said, “His writings mirrored society all through our development as a nation and he raised his pen when it mattered the most to condemn societal ills that threatened our collective existence and advancement as a nation as well as a continent.”

Meet The 23-Year-Old Woman Who Already Has 11 Biological Children And...

Youth Leader Caned In Public For Molesting A Young Girl In...