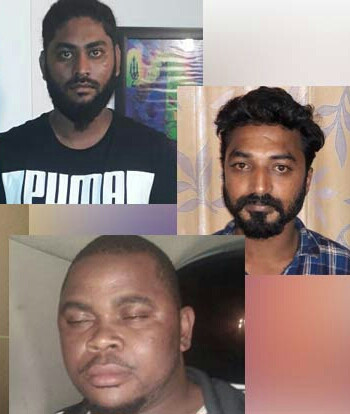 A Nigerian national and his two Indian accomplices have been jaield in India.

A special court for exclusive trial of cases under NDPS act in Chennai convicted and sentenced them to 10 years rigorous imprisonment for the possession of narcotic substances.

According to Times of India, the three accused, Chukwu Simon Obinna, 30, K Kumaresan, 26 and C Arun Diwakar, 33, were arrested near an apartment in Porur in 2018, for the possession of the narcotic substances.

According to the prosecution, SRMC police received a tip off about exchange of Narcotics in Porur and on December 17, 2018, they apprehended the trio near an apartment complex.

Police found the trio to be in possession of psychotropic and narcotic substances in their bags, which they had planned to sell. Police seized 220 grams of ecstasy pills, 18 grams of Cocaine, 8 grams of MDMA, 9 gram of Meth from them.

According to investigating officers, Obinna had come to India on an employment visa. His modus operandi to expand his business was allegedly to supply drugs to tourists in Goa before luring them to join him as agents. That was how Kumaresan and Diwakar became part of the drug network.

When the case came for trial on October 8, the counsel for the accused contended that their clients are not guilty and argued that there were irregularities in the arrest and lack of clear evidence.

Among the many arguments, the counsel for the accused submitted that independent witnesses were not cited by the prosecution and the same is very much fatal to the case prosecution.

The Judge, however observed from the records that the scene of crime is a service road and held that for the mere reason of non production of independent witnesses the case of the prosecution cannot be rejected.

“The oral testimony of official witnesses cannot be disbelieved. When the evidence of seizure officer is credible, non production of independent witnesses is not fatal to the prosecution,” Judge V Thenmozhe stated.

The court further observed that people are generally reluctant to give evidence in a criminal case on the ground that it may invite problems and expose them to great risk.

“Though the duty of the citizen is to assist the State to set the criminal law in motion as to commission of an offence and adduce evidence in favour of prosecution, there is no effective mechanism to provide safety to them,” additional district judge, V Thenmozhe stated.

The court also imposed a fine on the accused- Rs 3 lakh on the Nigeria national and Arun Diwakar and a fine of Rs 4 lakh on Kumaresan.

Meanwhile, it was gathered that Obinna had sought deportation to Nigeria but it was denied.

“I Had A Dream Rapture Happened “ – Singer Waconzy Reveals

Panic As Staff And Students Contract COVID-19 at Lagos College of...