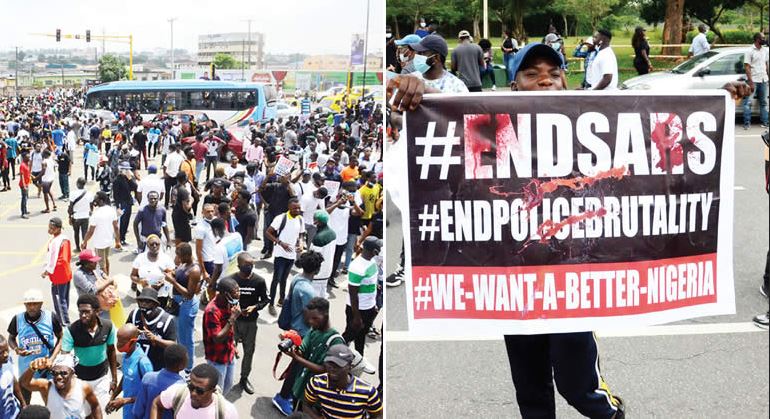 Segun Awosanya, the social media activist who is popularly known as Segalink, has raised alarm about the #EndSARS protests.

The activist says the #EndSARS protests in many locations across the country have been hijacked.

Segalink, who is a leader of the #EndSARS movement, described the hijackers as “known elements” in a series of tweets.

The PUNCH reports that thousands of Nigerians continued their protests in many states on Tuesday against police brutality, bringing traffic to a standstill in Lagos.

Demonstrations organised on social media erupted earlier this month calling for the abolition of the Special Anti-Robbery Squad accused of unlawful arrests, torture, and extra-judicial killings.

The Federal Government gave in to the demand on Sunday, announcing that the F-SARS has been disbanded.

On Tuesday, the Inspector-General of Police, Mohammed Adamu, ordered all defunct Special Anti-Robbery Squad personnel to undergo a psychological and medical examination.

He also set up the Special Weapons and Tactics Team that will replace the disbanded SARS.

But many have greeted the announcements with scepticism after previous vows to improve SARS went unfulfilled.

Instead, they began another advocacy using #EndSWAT as a replacement for #EndSARS which was the number one trend globally for more than 48 hours.

Further, plans were also announced that protests would hold in Lagos and Abuja.

Segalink said in a series of tweets, “They never fought for you. They waited for the advocacy to mature and seek to sow discord just to take over the narrative for their hidden agenda. You know them. They care less if you live or die. Keep your eyes peeled. Focus on the Goal.

“Hustlers being controlled by the lust after money are playing games and throwing narratives around. Your rights to protest must never be commercialised for any agenda. Check the patterns and note the players while keeping your focus.

“The attempt to hijack the #EndSARS #ReformPoliceNG Movement by known elements who were against it from day one and had to be a part now for fame and earnings is not surprising. They felt they can demonise me and take ownership by force. But they’ll fail again as always.

“Special thanks to @SavvyRinu et all, who started the organic protest before the hijackers took it over. We shall overcome. #EndSARS #ReformPoliceNG,”

Earlier, there had been allegations that some leaders of the #EndSARS campaign wanted to compromise during a meeting with the business community, including governors.

But activist, Aisha Yesufu, said she was lured into the meeting, adding that she would not have attended it in the first place if she knew the agenda.

“Let it be known that I, Aisha Yesufu is not interested in being in any committee. The streets are where I belong not the table. That’s my strength! Let those who are good at the table be put forth. We must always put our best foot forward!” she tweeted on Wednesday.

digestng - January 21, 2021 0
File photo According to Daily Trust, a melodrama occurred weekend at the sitting of the Benue State Judicial panel looking into human rights violations...

BBNaija 2020: There Is Nothing Wrong In Washing Vee’s Pants