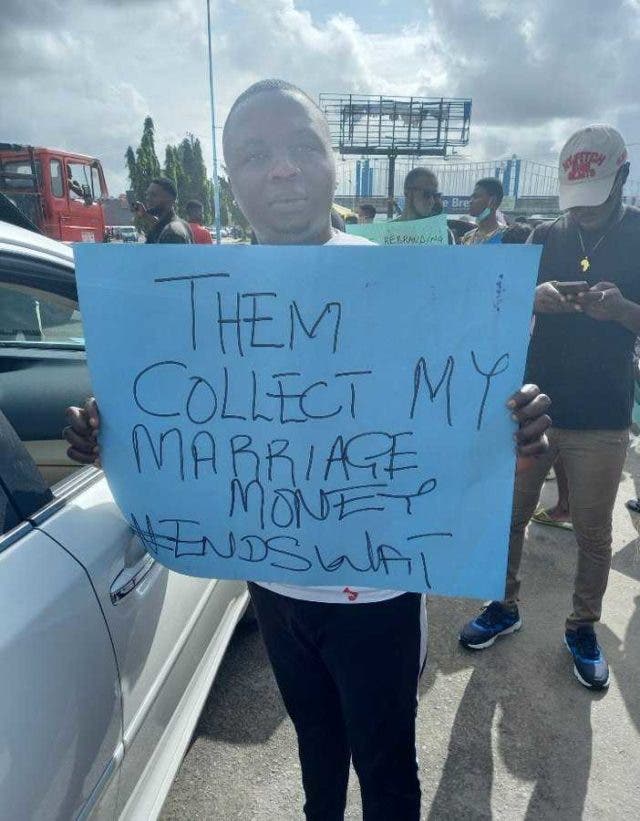 A Nigerian man has revealed that operatives of the Special Anti-robbery Squad of the Nigeria police extorted money he wanted to use to marry from him.

He said this is the reason why he decided to join the nationwide #EndSARS protests in a placard he displayed during protest.

The protest which is gradually entering its second week, has been raging on as youths demand total reform of the Nigeria Police Force over cases of brutality, extortion, human rights violations and extra-judicial killings, especially by members of the now-defunct Special Anti-Robbery Squad, SARS.

During the protest, an unidentified man caught the attention of other Nigerians, both online and offline as he revealed that SARS officials collected the money meant for his wedding.

He was seen holding a placard with an inscription boldly written on it and, it read: “THEM COLLECT MY MARRIAGE MONEY #ENDSWAT.”

Photo Of Lady Who Reportedly Died While Struggling to Get COVID-19 Palliatives In Abuja...

digestng - October 27, 2020 0
The woman allegedly died during struggle to get palliatives    A photo of the young lady who lost her life while trying to get COVID-19...

digestng - October 27, 2020 0
On Monday, October 26, the Kwara state police command paraded 144 of the suspected looters with many looted items recovered from them. Police...

Drama As Abuja Woman Drags Her Husband Before Court To Seek...