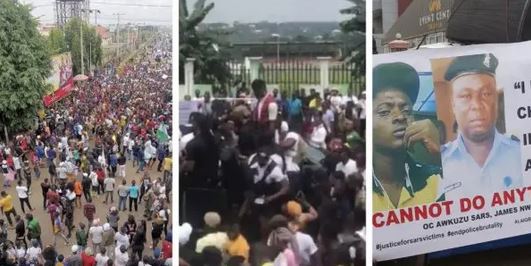 Following the on-going protest against police brutality in the country, protesters in Akwa, Anambra State are headed to the dreaded Akwuzu SARS unit, as they ask for justice for victims.

Today, the Anambra State youth, are heading to Akwuzu SARS to demand justice for victims who were killed by police brutality in the state.

The EndSARS protesters, also called for the prosecution of  James Nwafor, who they accused of leading several atrocities at the Akwuzu SARS unit during his time in office.

#EndSARS Protesters in Awka, Anambra State. Currently on their way to Awkuzu SARS.pic.twitter.com/G9CF3yokrp

digestng - March 2, 2021 0
APC   South East politicians in the All Progressives Congress interested in becoming President in 2023 have been urged to leave the party because they...

“The Biggest Mistake Women Make Is Thinking If A Man Engages Them And They...

digestng - March 2, 2021 0
Roman Goddess Popular Nigerian socialite, Roman Goddess has reacted to the video of Davido seen with a mystery woman which led to Nigerians dragging...