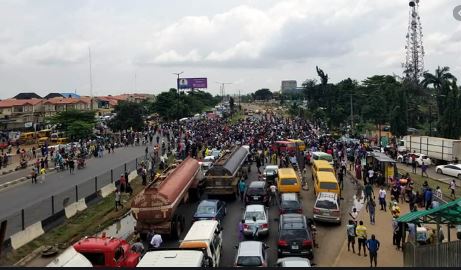 The youths were seen protesting against police brutality, carrying placards with different inscriptions as they blocked the expressway.

A protester who identified himself as Amaechi, while speaking to Punch said:, “We are all here on the Lagos-Ibadan Expressway because there is a nationwide protest for the soul of our country.

“#EndSARS, #Endpolicebrutality, end bad governance, and wickedness to the Nigerian youths. It is time for the youths to take over.”

There have been protests in most parts of the country since Wednesday  last week by Nigerians, mostly youths, who called for disbanding of SARS, accusing the police squad of corruption, high-handedness  and harassment

On Sunday, the Inspector-General of Police, Mohammed Adamu, disbanded the squad and on Tuesday, he set up the Special Weapons and Tactics Team to replace the disbanded SARS.

Despite the disbanding of the squad, #EndSARS campaigners presented five demands to the Federal Government, which the later on Tuesday said it had accepted.

The campaigners’  five demands include release of all persons arrested by the disbanded police unit and justice for victims of police brutality; setting up an independent body to oversee the investigation and prosecution of all reports of police misconduct (within 10 days); psychological evaluation of all disbanded SARS officers before they can be redeployed, and increase police salary so that they can be adequately compensated for protecting lives and property of citizens.

But the protests took a fresh dimension on Wednesday when hoodlums bearing cutlasses and sticks attacked protesters in Lagos and Abuja.

“Maximum Cooperation Or Heads Will Roll”

"I'm About To Kill Myself" – Singer, Queency Benna Cries...