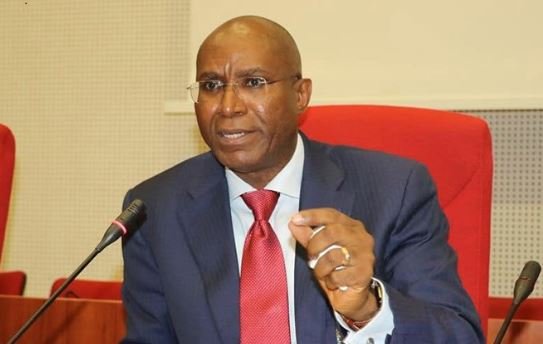 The Deputy Senate President Ovie Omo-Agege has accused the Central Bank of Nigeria of engaging in an unconstitutional transaction on Wedneday after Zamfara state sold a bar of gold to the country’s apex bank.

It was gathered that the gold was sold to the CBN for N5 billion.

Deputy Senate President Ovie Omo-Agege and Ijaw youths kicked against the arrangement that allows a state to sell mineral resource to the Federal Government, which according to them, is the constitutionally owner.

Omo-Agege described the sale as a breach of the laws guiding exploitation of mineral resources in the country. The youths, under the Ijaw Youths Council (IYC), accused the Federal Government of double standard and injustice.

The Deputy Senate President faults the arrangement while contributing to a debate on the 2021 Appropriations Bill at yesterday’s Senate plenary.

He told his colleagues that his constituents and other Niger Deltan people were worried about the development since all proceeds from oil in their territory solely go to the Federation Account.

The senator insisted that the proceeds from the sale  ought to be remitted to the federation account and not credited to the account of the Zamfara State government.

Omo-Agege said: “There is also something that is troubling our people which I think I should also bring up here.

“It is clear that the only two sources identified in the budget for the funding of the budget is the revenue from oil on the most part and borrowings, both local and foreign.

“But, we also have other sources or potential sources of revenue that is not being looked at.

“We often talk of leakages (in the system) but why even go into leakages when we can go directly to the solid mineral sector?

“Not too long ago, we saw the Governor of Zamfara State come before the CBN to present a gold bar worth close to about N5 billion.

“The gold bar was presented for sale to the CBN. Our people are beginning to wonder who owns this gold that is being sold to the CBN.

“They don’t sell oil in any of the Niger Delta states. I am wondering why a governor of a state should be selling gold bar from Zamfara to the CBN.

“There are two problems with that. We believe that whatever revenue that ought to come from that transaction belong to the entire country and not belonging to the state government.

“That is number one and we should actually look into that. That is an area we really need to develop.

“There is a lot of revenue that could come from there that will take the burden from this international borrowing.”

In Port Harcourt, the IYC accused the Federal Government of injustice by allowing artisanal mining of gold in the North, especially in Zamafara State, and forbidding a similar practice on crude oil in the Niger Delta.

In a statement, IYC President Timothy Igbifa observed that in the North where there are gold and precious stones, the locals and indigenes were mining them unmolested to enrich themselves.

The statement reads in part: “But it is illegal in the Niger Delta to engage in artisanal exploration of the vast hydrocarbon deposits in their area. If you say, it is double standard, applying two different set of rules in the same country, it is an understatement.

“It is the height of injustice that the people of Niger Delta have been forced to live with since 1914. Several attempts have been made to re-negotiate our continuous existence has an indivisible entity but to no avail.”

digestng - March 5, 2021 0
Pres Muhammadu Buhari, Femi Adesina Femi Adesina, the special adviser for media and publicity to President Buhari has warned those calling for his principal's...

Soldiers Kill 75 Boko Haram Terrorists During Bloody Battle In the...

Oyo Businessman Abducted Less Than 72 hours After The Murder Of...