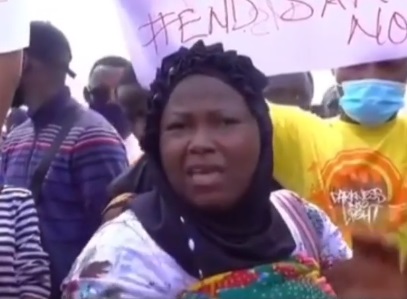 Operatives of the now defunct Special Anti-robbery Squad of the Nigeria police have been accused by a lady identified as Lawal Halimat of killing her brother.

According to Halimat, her older brother got involved in a fight and was arrested by officers at Adelubi police station. She said the case was then transferred to SARS office where the officers there allegedly killed her brother.

“My older brother and some boys got involved in a fight. They arrested him and took him to SARS office. From Adelubi police station they took him to SAR office then killed him. After killing him, they asked me to bring N350, 000 cash.

When I got there after payment, I did not meet my brother. When I asked for his whereabout, they told me they have transferred his case to Abuja”

Halimat said immediately she heard this, she went to the garage and begged the transport company there to allow her to attach herself to their commercial bus to Abuja as she doesn’t have money to pay the fare.

She said the transporters allowed her and that when she got to Abuja, she met with some police officers who after hearing her explanation, informed her she should go back to Ibadan as it is only cases of persons that have been killed that SARS officers claim have been transferred to Abuja.

Halimat said she became sick during the course of searching for the truth about her brother and that it was the hospital where she went for treatment that she discovered that the police officers brought her brother’s corpse to be deposited in the morgue.

She said the officers knew that her brother had been killed all along and still kept on deceiving her and extorting money from her.

She alleged that one of the officers even invited her to a hotel for a private meeting. She said it was the death of her brother that killed their mother.

We Are Not Moved By Empty Threats – Ohanaeze to Northern...