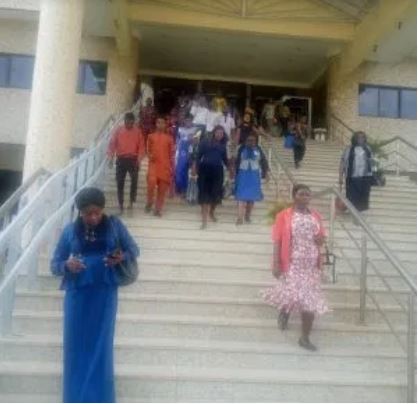 Federal High Court Abuja staff leaving the office for their various homes shortly after the instruction from the National Judicial Council (NJC) on Wednesday.

It was pure commotion that took over the the Federal High Court (FHC), Abuja, following an order to vacate.

According to NAN, there was pandemonium, on Wednesday, as judges, staff and litigants were asked to vacate the Federal High Court (FHC), Abuja, amidst the ongoing #EndSARS protests across Nigeria.

The instruction, which circulated like a wildfire at about 1:20 p.m, made the judges, staff and other people in the high-rise building, to abruptly stop their official duties as they filed out of the skyscraper.

The News Agency of Nigeria (NAN)’s efforts to get information from staff on why they were leaving their offices for home were unsuccessful.

“We are asked to leave the office now but I don’t know the reason,” one of the workers, who did not want her name mentioned, said.

However, the Deputy Chief Registrar, Admin of the FHC, Memunat Folami, said that there was an instruction from the Special Assistant to the Chief Judge, John Tsoho, that staff should close for the day’s work.

She said further that the instruction came from the National Judicial Council (NJC) down to the chief judge that all staff should close for the day.

“You know the head of the court cannot pass an instruction and we will not carry it out. Even the Ministry of Justice staff did not come to work today,” Ms Folami said.

Earlier in the day, there were sittings at a number of courts.

For instance, Justices Inyang Ekwo, Okon Abang and Ijeoma Ojukwu, were among the judges that sat on Wednesday.

The FHC’s acting Information Officer, Catherine-Oby Nwandu, could not be reached at the time of filing the story.

‘I Tested Positive To HIV After Three Men Slept With Me”

Omoyele Sowore Begs Burna Boy To Protest With Him Against Buhari...