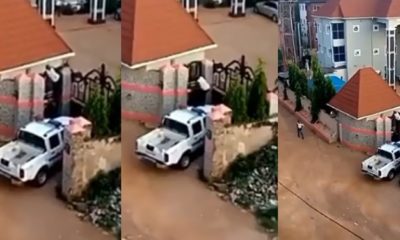 DPO caught scaling fence while escaping for his life

A man suspected to be the DPO of a police station has been caught on tape running for his life after hooldlums invaded his station.

According to reports, some hoodlums stormed his station and he quickly ran away from the station.

He escaped a hotel, but on getting there, the hotel security refused to open the gate for him to come in. He had to climb the fence and jump over.

The video which is going viral, shows the alleged DPO, climbing the hotel fence and jumping over, in a bid to escape from the hoodlums.