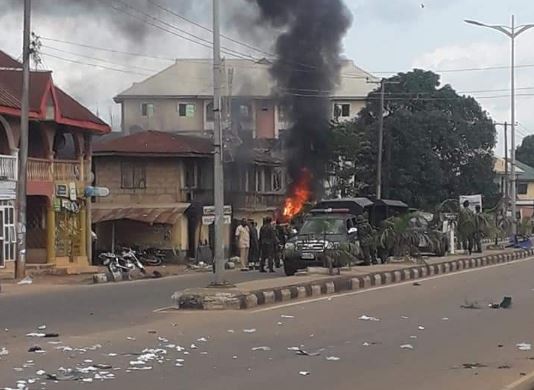 The youths burnt the stations in Ebonyi

Two Police Stations in Abakaliki, Ebonyi State capital have been burnt down.

The incident happened on Wednesday.

Some policemen sustained injuries during the attack.

As a result, the Governor David Nweze Umahi of Ebonyi State, on Wednesday, imposed 24-hour curfew in the state to curb criminal activities and equally reduce attack on government property.

Umahi said the hoodlums and cultists have burnt many police stations, moving to prison to set prisoners free and are equally attacking security agencies including shooting at them.

According to him, “These hoodlums and cultists are not Ebonyians but they came from outside because they do not wish us well.”

“Security agencies in our state have sustained injuries from the attacks of these hoodlums and the provocation. These Security agencies have exercised great patients and wisdom in handling the issue at stake and I urge them to continue doing just that.”

“Government vehicles and infrastructure of government have come under severe destruction and this is regrettable.”

“I will continue to say that the peaceful protesters have their legitimate demands and I offer my apologies for many areas we leaders have failed our young children. We believe that the success of the peaceful #endSARS protest will make we leaders make amends where necessary.”

” I appeal to our people not to allow outsiders to distroy the modest improvements of our state which may not have gone down well to some people outside our state who do not wish us well and who imported these hoodlums to our state.”

” I therefore, call on security agencies to block all our borders from 7:00 pm today, the 21st October, 2020 and to protect all lives and property.”

” Furthermore, I, the Governor of the state, by the powers conferred on me by the constitution of the federal republic of Nigeria, I hereby impose a 24 hours curfew from 7:00 pm today, the 21st of October, 2020.”

Electronic Voting Without Transmission of Result Is Counterproductive