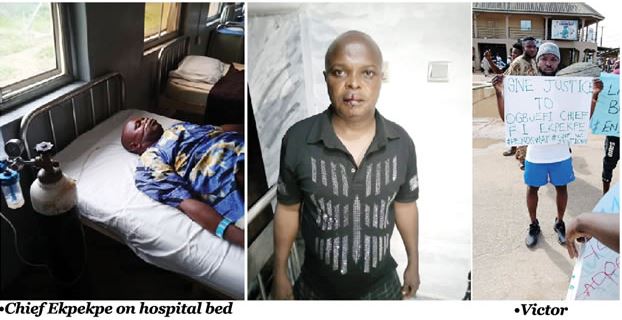 Nigerian entertainer, Victor Ekpekpe, has recounted the horrific experience his father had at the hands of police officers.

A master of ceremonies, Mr Victor Ekpekpe, tells MATTHEW OCHEI how a team of the Inspector General of Police Monitoring Unit allegedly beat his father, Chief F. I. Ekpekpe, till he lost consciousness in Obiaruku, Delta State in June 2020.

I am a professional master of ceremonies and an entertainer. I am a graduate of the University of Benin, Edo State. I graduated in 2015. When I could not get a regular job, I ventured into entertainment. That’s what I do to feed my family.

Have you been affected by police brutality?

Yes, my father was brutalised on June 20, 2020 by some evil policemen from the Inspector General of Police Monitoring Unit. It was very horrible. One Inspector Christopher led the IGP monitoring team to my father’s house.

How did it happen?

My father was surprised so he told them they could not just come around 2am to search my house.

He told them that the police had no right to search someone’s house around 2am without a search warrant. They were not even in uniform and they didn’t show their identity cards. They asked my father if he wanted to teach them their jobs and said if his son did not give them N2m, the house would be brought down. And my mum has a bad leg. As she managed to come out, they pushed her and she fell down. Then they started beating my father, just because he demanded to see their search warrant.

They used a rifle to smash his mouth and blood was all over the ground. Three police officers outside were shooting indiscriminately and eventually they searched everywhere but could not find anything incriminating. Yet they put my father in the boot of their vehicle and drove some distance. They thought my father was dead so they dumped him by roadside. They didn’t remember they had reported at Obiaruku Police Divisional Headquarters before coming to our house. That was how we were able to get the name.

So, my father returned home with injuries all over his body and we took him to the hospital for treatment. Three days later, he fell down as he was walking on the street. He was rushed to Delta State Management Board Hospital, Obiaruku, where it was discovered that he had internal bleeding.

Are you satisfied with the recent dissolution of the Special Anti-Robbery Squad?

I don’t believe they should have scrapped SARS, but my opinion is that they should end brutality, extortion, and corruption in the system because we still need the police. The bad eggs among them must be fished out.

What did you do after that?

We wrote a petition and even sued them. We took the matter to the Federal High Court, Asaba, Delta State, but till now, nothing has been done about it. They lie to defend their actions but people can tell when they are lying. But who shall we cry to? We don’t have anybody to run to that will ensure we get justice. We are in a country where human beings are been treated like dogs. We went to court to get justice but we couldn’t get justice there. We are pleading for justice. I am crying because if this could happen to my father in our own country, then what should we expect outside this country.

Have you had any other encounter with the police?

I have had so many encounters with the police. Only two out of 100 police officers are genuinely working to protect citizens. The activities of SARS, especially those of their office at Awkuzu in Anambra State, are very bad. They should tell me why they came to my father’s house. Are the policemen more Nigerian than we are?

How would you describe #EndSARS protests?

It is the fault of the government. They delayed and were slow in responding to the protesters. People are already angry with the government, so this just presented an opportunity for them to express their accumulated anger.

Photos Of Three Notorious Telecom Mast Vandals Who Were Nabbed In...

The Horrifying Moment A Professor Was Attacked By Robbers While On...